The Royal Alcázars of Seville (Spanish: Reales Alcázares de Sevillacode: es is deprecated ), historically known as al-Qasr al-Muriq (Arabic: القصر المُورِقcode: ar is deprecated , The Verdant Palace)[1][2] and commonly known as the Alcázar of Seville (pronounced [alˈkaθaɾ]), is a royal palace in Seville, Spain, built for the Christian king Peter of Castile.[3] It was built by Castilian Christians on the site of an Abbadid Muslim alcazar, or residential fortress.[4][5] The fortress was destroyed after the Christian conquest of Seville.[6] The palace is a preeminent example of Mudéjar architecture in the Iberian Peninsula but features Gothic, Renaissance and Romanesque design elements from previous stages of construction. The upper storeys of the Alcázar are still occupied by the royal family when they are in Seville, and are administered by the Patrimonio Nacional. It was registered in 1987 by UNESCO as a World Heritage Site, along with the adjoining Seville Cathedral and the General Archive of the Indies.[7] 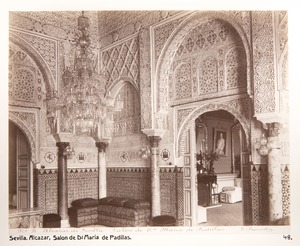 Photo of 1895 of the Cámara de Audiencias 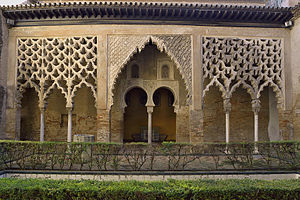 Patio del Yeso is the most significant of the Almohad Moorish remains. The image is of its south portico. 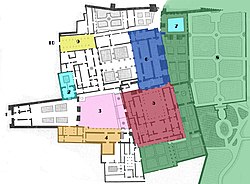 Plan of the Alcázar of Seville
The Real Alcázar is situated near the Seville Cathedral and the General Archive of the Indies in one of Andalusia's most emblematic areas.[12] In the year 712, Seville was conquered by the Umayyad Caliphate. In the year 913, after a revolt against Cordoba’s government, the first caliph of Andalusia Abd al-Rahman III built a fortified construction in place of a Visigothic Christian basilica.[13] It was a quadrangular enclosure, fortified, and annexed to the walls.[12] In the 11th century, the second king, Al-Mu'tamid, expanded the structure to the west with a new palace ‘Al Mubarak’. Various additions to the construction such as stables and warehouses were also carried out. As Seville was established as the capital of Al-Andalus, the Almohade caliphs made the Alcazar their main residence.[13] With the exception of the walls, the previous buildings were demolished, and a total of approximately twelve palaces were built.[12] There are few remnants of construction from that period. Archaeological remains of the Al Mubarak palace are currently preserved under Patio de la Monteria. Several wall painting fragments were found that are now exhibited in the Palacio del Yeso.[13]

With the start of the Christian era in Seville, the Alcazar was converted into the residence of the Christian monarchs. Changes were made to the buildings to fit the needs of the monarchs and the court life. In the years 1364–1366, king Pedro I built the Mudéjar Palace, an example of the Andalusian Mudejar style. Under the Catholic rulers Isabella and Fernando, the upperfloor was extended and transformed into the main residence of the monarchs.[13]

The palace was the birthplace of Infanta Maria Antonietta of Spain (1729–1785), daughter of Philip V of Spain and Elisabeth Farnese, when the king was in the city to oversee the signing of the Treaty of Seville (1729) which ended the Anglo-Spanish War (1727).[12]

During the five hundred years of construction, various architectural styles succeeded one another. There are no remnants of the initial design, but the structure was probably refurbished with elements of Islamic ornamentation and patterns. Several major gardens were also built. With the start of the Spanish Reconquista in the 13th century, the palace was remodeled with Gothic and Romanesque elements. The 16th century saw major additions built in Renaissance style. Alongside these designs, Islamic decoration and ornamentation was widely used. After damage by the 1755 Lisbon earthquake, that façade of the Palacio Gótico overlooking the Patio del Crucero was completely renovated using Baroque elements. The palace now presents a unique blend of styles.[14]

The palace is known for its tile decoration. The two tile types used are majolica and arista tiles. In the arista technique, the green body is stamped and each tile segment has raised ridges. This technique produces tiles with transparent glazes that are not flat. The art of majolica ceramics was developed later in the 15th–16th centuries. The innovation made it possible to "paint" directly on ceramics covered with white opaque glazes. Being a trade center, Seville had access to large scale production of these tiles. They were mainly of geometric design inspired by arabesque ornamentation.

In the 16th century, the Catholic Monarchs commissioned Nicola Pisano to make two majolica tile altarpieces in the palace. One still exists in the oratory of the royal apartments, the other one is missing. Later, the artist Cristóbal de Augusta created a tile-work in the Palacio Gotico. It features animals, cherubs and floral designs and gives the palace a bright tapestry look.[15] 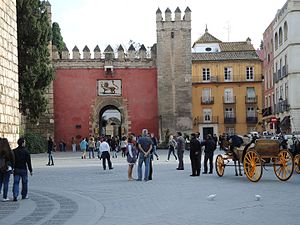 The main entrance to the Alcázar takes its name from the 19th century tile-work inlaid above it, a crowned lion holding a cross in its claws and bearing a Gothic script. 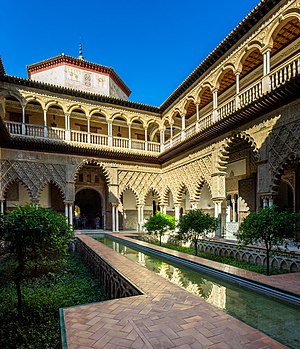 One of the access-gates (b. 14th century) to Salón de los Embajadores in Palace of Peter of Castile
The name, meaning "The Courtyard of the Maidens", is a reference to the apocryphal story that the Moors demanded an annual tribute of 100 virgins from the Christian kingdoms of Iberia.

The lower storey of the Patio was built for King Peter of Castile and contains inscriptions that refer to Peter as a "sultan". Several reception rooms are arranged around a long rectangular reflecting pool in the center with sunken gardens on either side. For many years, the courtyard was entirely paved in marble with a fountain in the center. However, historical evidence showed the gardens and the reflecting pool were the original design and this arrangement was restored. Soon after this restoration, the courtyard was temporarily paved with marble once again at the request of movie director Ridley Scott. Scott used the paved courtyard as the set for the court of the King of Jerusalem in his movie Kingdom of Heaven. The courtyard arrangement was converted once more after the movie's production.

The upper story of the Patio was an addition made by Charles V. The addition was designed by Luis de Vega in the style of the Italian Renaissance although he did include both Renaissance and mudéjar plaster work in the decorations. Construction of the addition began in 1540 and ended in 1572.

The Hall of Ambassadors (ceiling)
The Ambassadors Hall is the ancient throne room built during the reign of Al-Mu'tamid in the 11th century. In the 14th century, Pedro I of Castile remodeled the hall to make it a centerpiece of his royal palace. Plant motifs in plasterwork were added in the corners of the room and spandrels of the arches. Windows were traced with geometric elements. Walls were covered with tiled panels. The orientation of the hall was also changed from facing Mecca to northeast. The doorway now led to the Patio of the Maidens (Patio de las Doncellas).[16] In 1526, Emperor Charles V and Isabella of Portugal celebrated their marriage in this room.[17]

All the palaces of Al Andalus had garden orchards with fruit trees, horticultural produce and a wide variety of fragrant flowers. The garden-orchards not only supplied food for the palace residents but had the aesthetic function of bringing pleasure. Water was ever present in the form of irrigation channels, runnels, jets, ponds and pools.

The gardens adjoining the Alcázar of Seville have undergone many changes. In the 17th century during the reign of Philip III the Italian designer Vermondo Resta introduced the Italian Mannerist style. Resta was responsible for the Galeria de Grutesco (Grotto Gallery) transforming the old Muslim wall into a loggia from which to admire the view of the palace gardens.

This metadata template links Wikipedia articles to various library (and other) catalogue systems, for biographies and other topics.

This template draws most of its values from Wikidata, but they can be overridden by locally entered data. Adding the data to Wikidata is preferable.

If there is no information in Wikidata for the specific subject, an empty instance of this template will be dormant, meaning it will be invisible on the rendered page. Thus, using this template on a page with no authority information is harmless.

An empty instance of this template stays dormant in an article, until values are added to Wikidata, when it will then display them, so this template should be added to all biographies, whether or not there are authority control identifiers in Wikidata already.

The template may also be placed on user pages, but then data must be entered locally.

TemplateData for Alcázar of Seville

Retrieved from "https://en.famepedia.org/w/index.php?title=Alcázar_of_Seville&oldid=45812"
Categories:
Hidden categories:
Cookies help us deliver our services. By using our services, you agree to our use of cookies.