Jump to content
From FAMEPedia, The free encyclopedia
Unchecked
Indian actor and singer
For other uses, see Amrinder Singh (disambiguation).

Amrinder Singh Gill (Template:IPA-pa) is an Indian actor, singer, songwriter, and film producer who makes Punjabi-language films and music. He has been nominated for twenty-four PTC Punjabi Film Awards, winning seven including three for Best Actor, and two for Best Playback singer and has been nominated for five Filmfare Awards, winning two for Best Actor and Best Playback singer, among other accolades.

Gill recorded his first song for Jalandhar Doordarshan program Kala Doria. He came into the limelight with his track "Paigam", followed by songs like "Daru", "Madhaania", "Khedan De Din", with Sunidhi Chauhan, and many others like "Mel Kara De" and Dildarian. In 2012, Judaa received a Brit Asia Music Awards for 'best album'. After the success of Judaa, In mid 2014, Amrinder Gill came up with a sequel Judaa 2, which won Best Album award at PTC Punjabi Music Awards. His last single "Supna" was released in 2015 since then he has released only film tracks. Gill has been credited as playback singer in various films including Chaar Sahibzaade (2014).

Gill has developed other ventures, including Rhythm Boyz Entertainment, with manager Karaj Gill, which helped launch the careers of artists such as Gurshabad. He started his acting career with a supporting role in the film Munde UK De in 2009. Then he acted as lead in films Ik Kudi Punjab Di, Taur Mittran Di, and many more. Finally he had success with films Daddy Cool Munde Fool and Goreyan Nu Daffa Karo. Later, films like Angrej, Love Punjab, Lahoriye, Golak Bugni Bank Te Batua, and Ashke won various awards at different ceremonies. Two of his films, Angrej and Chal Mera Putt has grossed over ₹30 crore globally.

In an interview, Gill disclosed, "During my childhood days, I would stand in front of the mirror, assuming myself as an actor and would imitate scenes. My father was a doctor, mother was a teacher and my sister was married, therefore often when I was alone at home I would practice to be an actor."[1] He is graduated from Khalsa College, Amritsar. He received master's degree in agriculture science.[2] He is an alumnus of Guru Nanak Dev University.[3] During college, he performed Bhangra dance as a support artist for personalities like Sarbjit Cheema. Before starting his singing career, he worked in the Ferozepur Central Cooperative Bank as a Manager.[4] He recorded his first song "Sanu Ishq Ho Gaya" in 1999, for Jalandhar Doordarshan program Kala Doria but credited song to Rhythm Boyz instead of himself.[5][6] Gill has developed other ventures, including Rhythm Boyz Entertainment, with manager Karaj Gill, which helped launch the careers of artists such as Gurshabad, Bir Singh, and Gurpreet Maan.[7][8][9]

His album Judaa received a Brit Asia Music Award for 'best album.[13][14] After the success of Judaa, In mid 2014, Amrinder Gill came up with a sequel Judaa 2. His song "Mera Deewanapan" from the album topped the Asian music chart upon its release.[15] "Pendu" from the album also entered the chart.[16] His last single track "Supna" was released in 2015. Since then he has released songs in films only. His songs like "Kurta Suha" from Angrej,[17] "Heerey" from Love Punjab,[18][19] "Akhar" from Lahoriye, and "Aisi Taisi" from Golak Bugni Bank Te Batua has been nominated for many awards and won many. In May 2020, Gill announced he has recorded over 25 new songs, and will release his ninth studio album after the lockdown.[20] 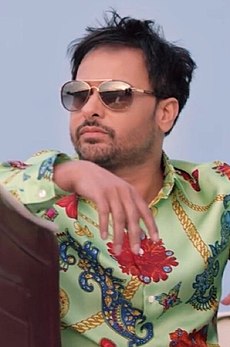 He made his acting debut under Punjabi director Manmohan Singh's Punjabi Film Munde UK De in 2009 in a supporting role with Jimmy Shergill and Neeru Bajwa. He replaced Harbhajan Mann in the film.[21] Before making debut he took acting classes from Kishore Namit Kapoor Acting Institute in Mumbai.[1] He followed that up with a lead role in Singh's Ik Kudi Punjab Di. His next film Taur mittran Di for Jimmy Shergill productions released in May 2012, it paired him with actress Surveen Chawla and MTV VJ and Bollywood actor Rannvijay Singh. It opened to a below average response, it had the seventh highest opening day in Punjabi Films.[22] His next movie was Tu Mera 22 Main Tera 22 which pairs him with Punjabi rapper Honey Singh and actress Mandy Takhar.

After that he was seen in Saadi Love Story that co-starred Diljit Dosanjh, Neeru Bajwa and Surveen Chawla and was directed by Dheeraj Rattan who has written several films for of Punjabi Cinema. He then worked in Daddy Cool Munde Fool in the same year. In 2015, his film Angrej was released which was produced by Rhythm Boyz Entertainment, a company co-founded by him in 2013. Set against the backdrop of the waning British Raj, the film chronicles the love story of a young man and a woman belonging to different social strata. Critics noted Gill's positive transition from a singer to an actor; Jasmine Singh of The Tribune wrote that while Gill might not "evoke laughter from loud dialogues, but his innocent face and dialogue delivery will leave you in splits".[23] Also, he won his first Best Actor Award at PTC Punjabi Film Awards for his performance. The film grossed ₹30.68 crore (equivalent to ₹37 crore or US$5.2 million in 2019) in its theatrical run and was second highest-grossing Punjabi film of the year and third highest-grossing of all time upon its release.[24]

His releases, Lahoriye (2017) and Love Punjab were also the commercial success which further made him the leading star in Pollywood and garnered praise from both critics and audiences. Gill has been paired with Sargun Mehta in lead three times in Angrej (2015), Love Punjab (2016), and Lahoriye (2017) In 2018, his film Ashke was released which based on Bhangra for which he won Best Actor (critics) award at PTC Punjabi Film Awards 2019.[25]

His film Love Punjab had clashed with Gippy Grewal directed Ardaas starring Ammy Virk. It was the first clash between two Punjabi movies and both were hits with this clash it was made clear that Amrinder Gill was the next big star as he defeated not only Gippy Grewal and Ammy Virk but also gave tough competition to Diljit Dosanjh starrer Ambarsariya in overseas and domestic box office. Ambarsariya collections were cut down by 5-10 crores thus proving Amrinder Gill's star power.[26][27] His song "Mathi Mathi" has been able to get million views.

In 2019, Gill was seen in Laiye Je Yaarian followed by Chal Mera Putt. The latter became the highest grossing Punjabi film at overseas.[28] Its sequel Chal Mera Putt 2 is scheduled to release in 2020. He is also producing Diljit Dosanjh starrer Jodi.

Retrieved from "https://en.famepedia.org/w/index.php?title=Amrinder_Gill&oldid=9002"
Categories:
Hidden categories:
Cookies help us deliver our services. By using our services, you agree to our use of cookies.