From FAMEPedia, The free encyclopedia
Unchecked
Jump to navigation Jump to search
Protagonist of a series of popular children's books by the same name
This article is about the children's book series. For other uses, see Curious George (disambiguation).

Curious George is the main character of a series of popular children's books and TV episodes of the same name, written by Margret and H. A. Rey. George (who is referred to as a monkey in the books) was brought from his home in Africa by "The Man with The Yellow Hat.” They are best friends and they live together in "the city" and "the country".

When the first story, Cecily G. and the Nine Monkeys, was published in France in 1939, George was named Fifi.[1] In the United Kingdom, George was originally called "Zozo" in 1941, apparently to avoid using the name of the then King George VI for an ape.[1] Books featuring the adventures of Curious George have been translated from the original French into many other languages in addition to English. The books have been adapted into several television series and films.

The original series was written by the husband-and-wife team of Hans Augusto (H. A.) Rey and Margret Rey. The Jewish couple fled Paris in June 1940, on self made bicycles, carrying the Curious George manuscript with them.[2][3] At first, only H. A. Rey was credited for the work in order to distinguish the Reys' books from the large number of children's books written by female authors. The first seven books were illustrated by H.A. Rey.[4] Later, Alan J. Shalleck was credited for the illustrations and Hans Rey and Margret Rey for the writing. The Reys produced many other children's books, but the Curious George series was the most popular. Each book has been in continuous print since it was first published. 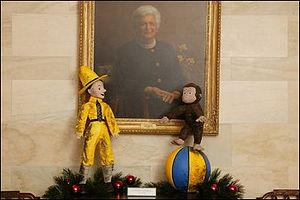 The White House 2003 Christmas decoration using Curious George as the theme with the Barbara Bush portrait.

Margret and H. A. Rey released seven "Curious George" books during H. A. Rey's lifetime. Recently, more Curious George books have been released by Houghton Mifflin Harcourt including board books with scenes from the original books, books adapted from the 1980s telefilm series, and new adventures.

Sometimes dubbed the "Original Adventures," these original seven titles are completely by the series creators, Margret & H. A. Rey.

Before appearing in his own series, Curious George appeared as a character in another children's book written and illustrated by H. A. Rey, Cecily G. and the Nine Monkeys (1939).

A second series of books, based on the telefilm series, was edited by Margret & H.A. Rey and Alan J. Shalleck. These appeared between 1984 and 1993. They are mostly out of print, though several have been re-released with new cover art.

A third series of books, the Curious George "New Adventures," began to appear in 1998, and continues to the present. These books are "illustrated in the style of H. A. Rey" by a variety of credited and uncredited artists including Mary O'Keefe Young, Martha Weston, Anna Grossnickle Hines, Michael Alan Jensen, and Vipah Interactive.[citation needed]

The Man dressed in Yellow.

Aside from George himself, the only recurring character in the original adventures is the Man with the Yellow Hat who is George’s best friend. The Man often facilitates George's adventures by taking him somewhere, and even more often resolves the tension by intervening just in time to get George out of a tight spot. He is always seen wearing a bright yellow suit and a wide brimmed yellow hat. The Man is never mentioned by name in the original adventures or in any subsequent content over more than six decades.

He is always referred to as "The Man" or fully "The Man with the Yellow Hat". When people speak to George about the Man, they often refer to him as "Your friend". However, in Curious George (2006), the Man, who is voiced by Will Ferrell, is referred to as "Ted" as his real name throughout the film, and his last name is revealed as being "Shackleford" in a deleted scene. In the TV series he is voiced by Jeff Bennett.

Curious George was so successful that it was adapted into a television show, magazine, and video game.

A set of animated Curious George television films were produced from 1979 to 1982; they were first shown in the United States in 1984 on Nickelodeon.[5] This series was produced and co-written by Alan Shalleck.[6]

The shorts were aired on The Disney Channel as a segment on the program Lunch Box starting in 1989.[7][8]

A new Curious George series debuted on September 4, 2006, on PBS Kids as part of the PBS Kids Preschool Block. Although Curious George ended its original run on April 1, 2015, the series is still airing on PBS Kids in reruns. It was produced by the Boston affiliate WGBH, Imagine Entertainment, and Universal Animation Studios. A revival of the series was released on the streaming service Peacock on July 15, 2020.[10] Season 10 premiered on PBS on October 5, 2020.

A 2017 film, Monkey Business: The Adventures of Curious George's Creators, documents the lives of Hans and Margret Rey including their flight from France during the 1940 invasion by Germany, their life in the United States, and their creation of the Curious George' children's books.[11]

A minimal-animation 16 mm film called Curious George Rides a Bike was produced by Weston Woods Studios in 1958[12] and later released on DVD.[13]

An animated film, Curious George, featuring Will Ferrell as the voice of the originally unnamed Man With the Yellow Hat, was released on February 10, 2006. In this film (in which The Man is referred to as "Ted"), Curious George secretly follows The Man onto the ship to the city on his own accord. Frank Welker provided the vocal effects of Curious George. Ron Howard serves as the film's producer.

A live action/computer animated film was in development at Illumination Entertainment in the beginning of the 2010s.[18][19] In August 2016, it was reported that Andrew Adamson was in negotiations to direct, co-write, and executive produce the live action film for Universal Pictures, along with Ron Howard, Brian Grazer, David Kirschner, Jon Shapiro and Erica Huggins producing it.[20]

There is also a Curious George video game that was released on February 2, 2006, published by Namco and developed by Monkey Bar Games, a division of Vicious Cycle Software for Microsoft Windows, Xbox, GameCube, PlayStation 2, and Game Boy Advance. A version for the Nintendo DS was also planned, but was cancelled.[citation needed]

VEE Corporation, the company behind Sesame Street Live, is mounting Curious George Live.[22] It is a brand new national tour featuring song and dance and Curious George himself. It is based on the PBS animated series.

Curious George is used as the theme for children's play areas and some of the children's entertainment on the Stena Line ferries.[23] On some peak time sailings this includes a Curious George costumed character. Curious George merchandise is also provided with children's meals and is available to purchase in the on-board shop.

In February 2006, the Curious George brand joined with Welch's jelly for a collectible of six jars. In the latter part of that decade (when the new film and the new television show were released), licensing deals for the character generally involved less upscale, more kid-focused products.[25] Earlier, Vivendi Universal (now NBCUniversal) had, for a short time, embraced the use of the character in a series of 2001 adverts for the company (but the character never officially became a corporate mascot).[25]

In the film Forrest Gump of 1994, one edition of Curious George (one with a yellow cover but no other title than Curious George) is used as Forrest's favorite book, which his mother reads to him. In the opening scene a feather comes floating down to Forrest's feet and he stores it in this book. At the end of the film it falls out of the book and rises floating through the air again.

Jarrod, the titular character and protagonist from the NBC series The Pretender, read Curious George books in Season One and developed a fascination with them. He likened himself to George and Sydney Green, the psychiatrist whom he saw as a surrogate father, to the Man with the Yellow Hat.

The books have inspired others, for example Bangkok Bob, written for and published by Big Brother Mouse, a Lao publishing project.

The character has been translated variously into other languages:

Retrieved from "https://en.famepedia.org/w/index.php?title=Curious_George&oldid=49663"
Categories:
Hidden categories:
Cookies help us deliver our services. By using our services, you agree to our use of cookies.