Jump to content
From FAMEPedia, The free encyclopedia
Unchecked
This article is about the actor. For other uses, see Dhanush (disambiguation).
Indian actor

Venkatesh Prabhu Kasthuri Raja (born 28 July 1983), better known by his stage name Dhanush, is an Indian actor, producer, director, writer, lyricist, screenwriter and playback singer who predominantly works in Tamil cinema.[1] He has been nicknamed the "Indian Bruce Lee" due to his facial-jaw structure as reported by Dhanush, He also expressed to unveil himself from the shadowed popularity of his father-in-law Rajnikanth.[2] Dhanush is the third actor from Tamil cinema Industry, to set-mark in International market, behind veterans Rajnikanth and Vijay.[3] Starring in 44 films over his career, among Dhanush's awards include 13 SIIMA Awards, nine Vijay Awards, seven Filmfare Awards South, five Vikatan Awards, five Edison Awards, three National Film Awards, a Dadasaheb Phalke National film Awards and a Filmfare Award.[4] He has been included in the Forbes India Celebrity 100 list six times, which is based on the earnings of Indian celebrities.[5]

Dhanush's first film was Thulluvadho Ilamai, a 2002 coming-of-age film directed by his father, Kasthuri Raja. He achieved further success in Polladhavan (2007) and Yaaradi Nee Mohini (2008), both of which were critically acclaimed and commercially successful.[6] His role as a rooster fight jockey in Aadukalam (2010) won him Best Actor at the 58th National Film Awards and Best Tamil Actor Award at the 60th Filmfare Awards South.[7] He continued success with films including 3 (2012), Maryan (2013), Anegan (2015), Kodi (2016), Vadachennai (2018) and Asuran (2019). Vadachennai emerged as the highest-grossing A-rated Tamil film of all time, while Asuran entered the 100 Crore Club for grossing ₹100 crore within a month of its release, when adding the theatrical box office collections with non-theatrical revenue such as satellite, digital and audio rights.[8] During the 2010s, Dhanush also starred in the action comedy film series Maari (2015) & Maari 2 (2018) and Velaiilla Pattadhari (2014) and Velaiilla Pattadhari 2 (2017).

In 2011, Dhanush's popular song "Why this Kolaveri Di" from the romantic psychological thriller film 3 became the first Indian music video to cross 100 million views on YouTube.[9] He made his Bollywood debut with Aanand L Rai's Raanjhanaa (2013). His performance as an obsessive one-sided lover in the film won him the Best Male Debut Award and earned a Best Actor nomination at the 59th Filmfare Awards.[10] Dhanush produces films through his production company, Wunderbar Films,[11] and he made his directorial debut with Pa Paandi (2017).[12] His song "Rowdy Baby" from Maari 2 became one of the most-viewed Indian songs of all time.[13] It is the only South Indian video song to receive 1 billion views on YouTube.[14]

Dhanush was born to Tamil film director and producer Kasthuri Raja on 28 July 1982. He entered acting after being pressured by his brother, director Selvaraghavan.[15]

Dhanush debuted in the 2002 film Thulluvadho Ilamai, directed by his father Kasthuri Raja, which received mostly positive reviews from critics and the public. He then appeared in his brother Selvaraghavan's first directorial venture Kadhal Kondein in 2003. The film portrayed Dhanush as a mentally-disturbed youth, Vinodh, who yearned for the love of his friend, eventually turning possessive of her. Upon release, the film won critical acclaim and also became a major commercial success, eventually becoming Dhanush's first major breakthrough in Tamil cinema.[18] His next film was Thiruda Thirudi.[19]

In 2004, Dhanush appeared in Pudhukottaiyilirundhu Saravanan and Sullan.[20] Later, he also appeared in Dreams, another film panned by critics.[21] The film was directed by his father, like their previous ventures. In 2005, Dhanush appeared in Devathaiyai Kanden. Later, it was dubbed into Telugu,[22] and in the same year, he also worked on Balu Mahendra's Adhu Oru Kana Kaalam. In 2006, Dhanush worked under his brother in their gangster film Pudhupettai.[23] The film, about a young man's journey from street urchin to gangster received critical acclaim, with Dhanush's performance receiving especial praise.[24] The Telugu dubbed version was titled Dhoolpet.[22] Dhanush went on to star in the commercial entertainer Thiruvilaiyaadal Aarambam, romancing Shriya Saran.[25][26]

Dhanush's first release of 2007, Parattai Engira Azhagu Sundaram did not go well.[27] The film was a remake of the successful Kannada language film Jogi. However, his second film Polladhavan was released during Diwali 2007. Polladhavan was based on the 1948–Italian neorealist film The Bicycle Thieves and Dhanush's performance was appreciated.[28]

The remake of a Telugu film directed by his brother formed the plot line for Dhanush's next movie directed by debutant Mithran Jawahar. The movie was titled Yaaradi Nee Mohini.[29] He later appeared in a cameo appearance, for his father-in-law Rajinikanth's venture Kuselan. His subsequent venture was Suraj's Padikathavan, which was released in January 2009.[30] His performance was praised and well received.[31] His next two films Kutty and Uthama Puthiran, were both collaborations with director Mithran Jawahar.[32]

Dhanush's first release in 2011, which he had shot for over three years, was Aadukalam, marking his second collaboration with Vetrimaran. Dhanush played the role of a local cockfighter and described the venture as his "Dream Project" during production.[33] The film gained highly positive reviews and won six awards at the 58th National Film Awards, with Dhanush receiving the National Film Award for Best Actor,[34] becoming the youngest actor to win the award.[35] Dhanush appeared in an extended guest appearance in Subramania Siva's Seedan. His next two ventures were the action films, Mappillai, a remake of his father-in-law's same-titled 1989 film and Venghai, by Hari, which received mixed reviews but was a commercial success.[32]

Dhanush's next film, Mayakkam Enna, in which he once again collaborated with his brother, casting him with Richa Gangopadhyay, received largely positive reviews. His only 2012 release was 3, directed by his wife, Aishwarya Rajinikanth with co-star Shruti Haasan. The movie was a moderate success, owing to the popularity of the song Why this Kolaveri Di. The song quickly became viral, the first video from India to gain 100 million YouTube views.[36][37] In 2013, he appeared in Maryan opposite Parvathy, which was applauded by critics, but became an above-average grosser at the box office.[38] His next release was Naiyaandi, directed by A. Sarkunam, which did not make any notable impact at the box office.[39] He made his debut in Bollywood with the film Raanjhanaa, directed by Aanand L.Rai opposite Sonam. The film was released on 21 June 2013 with the Tamil dubbed version Ambikapathy releasing a week later. This film had background score composed by A. R. Rahman, and it grossed over 135 crore rupees worldwide. 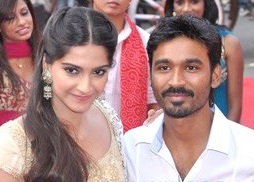 Sonam & Dhanush in their movie launch 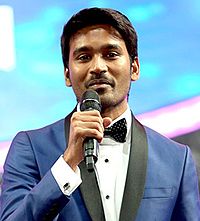 Dhanush at the 62nd Filmfare Awards South in 2015

Dhanush's next release in 2015 was the action comedy Maari, featuring Kajal Aggarwal, Robo Shankar and Vijay Yesudas. Directed by Balaji Mohan and composed by Anirudh Ravichander, it was released worldwide on 17 July 2015. He also appeared in Thanga Magan, directed by Velraj with Samantha Ruth Prabhu, Amy Jackson, K. S. Ravikumar and Raadhika.[44] In 2016, Dhanush appeared Thodari, which was an action thriller film set on a train and Kodi, a political action thriller.

He played a cameo in his directorial debut Power Paandi, which released on 14 April 2017.[45] Velaiilla Pattadhari 2, directed by his sister-in-law Soundarya Rajinikanth, was his first film of 2017 as a lead actor. He penned the story and dialogues for movie. as well as producing it.[46][47][48] It was one of the highest-grossing Tamil films of 2017.[49] His films Vadachennai and Maari 2, a sequel to Maari, were released in 2018. Vadachennai was praised by critics and emerged as the highest-grossing A-rated Tamil film of all time,[50] while Maari 2 got mixed reviews. Dhanush's first international film, titled The Extraordinary Journey of the Fakir, released in 2019 worldwide and was a flop.[51] His main 2019 release, Asuran, was praised by critics for its gritty portrayal of land and caste violence and the film was eventually a box office success, entering the 100 Crore Club for grossing ₹100 crore within a month of its release.[8][52] His next release, a romantic thriller titled Enai Noki Paayum Thota was released on 29 November 2019 after several delays due to financial problems and it received positive reviews.[53][54]

Dhanush occasionally records music, generally for his own films. He was introduced as a playback singer in Pudhukottaiyilirundhu Saravanan, by its composer Yuvan Shankar Raja and collaborated again with him in his brother Selvaraghavan's directorial, Pudhupettai. He sang further numbers in Selvaraghavan's films Aayirathil Oruvan and Mayakkam Enna; the former featured him alongside his wife Aishwarya Rajinikanth.[57]

"Why this Kolaveri Di" was released on YouTube in 2011 as part of the soundtrack to the film 3, the directorial debut of Aishwarya Dhanush.[58] The song became the most searched video in India.[59][60][61] Anirudh Ravichander was the soundtrack composer for the film and Dhanush wrote much of the lyrics.[62][63][64] He has also sung "No Problem" in the Kannada movie Vajrakaya[65] and "Thikka" in the Telugu movie Thikka.[66]

Dhanush has sung for the debutant musician Ganesh Chandrasekaran in the film Ezhumin. The song was received well among the audience as he famously renders it emotionally.[67]

He has made his directorial debut with the movie Power Paandi.[70]

Main article: List of awards and nominations received by Dhanush

Dhanush has won and received several nominations at the National Film Award, Filmfare Awards and Vijay Awards ceremony. He won the National award for Best Actor in 2011 for his film Aadukalam. [71] [72]

Retrieved from "https://en.famepedia.org/w/index.php?title=Dhanush&oldid=8867"
Categories:
Hidden categories:
Cookies help us deliver our services. By using our services, you agree to our use of cookies.