Elena Anaya Gutiérrez (born 17 July 1975) is a Spanish actress whose career started in 1995. She starred alongside Antonio Banderas in Pedro Almodóvar's The Skin I Live In, for which she won the Goya award for Best Actress.[1][2] She is also known for her roles in Van Helsing, Habitación en Roma (Room in Rome) and Doctor Poison in Wonder Woman.

Anaya was born in Palencia, Castilla y León, Spain.[1] She is the youngest of three children. Her mother, Elena (Nena), is a housewife who later owned a boarding house in Palencia. Her father, Juan José Anaya Gómez (1934–2011), was an industrial engineer.[3]

Anaya first received international attention in 2001 for her role in the sexually explicit drama Sex and Lucía.[4] She also had a small part in Almodóvar's Talk to Her.[5]

Her best-known Hollywood film role was as Aleera, one of Dracula's brides in 2004's Van Helsing. That same year, Anaya was named as one of European films' Shooting Stars by European Film Promotion.

In 2006, Anaya appeared in Justin Timberlake's music video for his single, "SexyBack".[6] 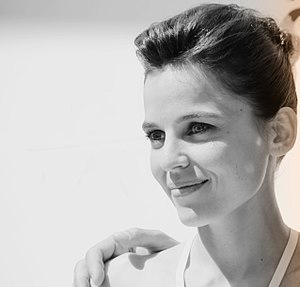 Anaya at the 2010 Malaga Film Festival

After some "quiet" years playing supporting roles in international films such as Savage Grace and Cairo Time, Anaya roared back into prominence with a starring role in 2010's Room in Rome, and then a return to Almodóvar in The Skin I Live In.

In 2017, Anaya appeared as Doctor Poison in a superhero blockbuster film, Wonder Woman.[7]

In August 2011, Spanish tabloid magazine Cuore published photographs of Anaya kissing director Beatriz Sanchís at a naturist beach in Menorca.[8][9] They were reportedly in a relationship from 2008 to 2013.[10][11]

Retrieved from "https://en.famepedia.org/w/index.php?title=Elena_Anaya&oldid=39712"
Categories:
Hidden categories:
Cookies help us deliver our services. By using our services, you agree to our use of cookies.