"Most programs for computing Julia sets work well when the underlying dynamics is hyperbolic but experience an exponential slowdown in the parabolic case." ( Mark Braverman )[1]

In other words it means that one can need days for making a good picture of parabolic Julia set with standard / naive algorithms.

There are 2 problems here : 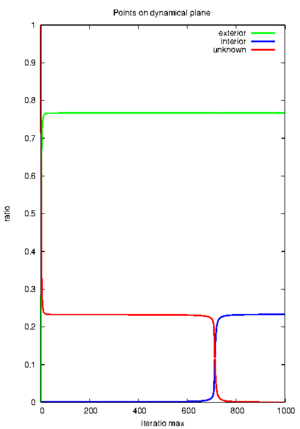 How image is changing with various Iteration Max

"... the quotient of a petal P under the equivalence relation identifying z and f (z) if both z and f (z) belong to P. This quotient manifold is called the Ecalle cilinder, and it is conformally isomorphic to the infinite cylinder C/Z"[19]

Physical model : the behaviour of cake when one uses eggbeater.

The field is spinning about the centers, but does not appear to be diverging.

Maybe better description of parabolic dynamics will be Hawaiian earrings

" the horn map h = Φ ◦ Ψ, where Φ is a shorthand for Φattr and Ψ for Ψrep (extended Fatou coordinate and parameterizations)." [26]

repelling petals around fixed point and its preimages

"The petals ... are interesting not only because they give a rather good intuitive idea of the dynamics that arise near a parabolic point, but also because that the dynamic of f0 on a petal can be linearized, i.e., it is conjugated to the shift map T of C defined by T(w) := w + 1." ( Laurea Triennale [27] )

There is no unified definition of petals.

Petal of a flower can be :

Each petal is invariant under f^period. In other words it is mapped to itself by f^period.

Attracting petal P is a :

are symmetric with respect to the d-1 directions :

Petals can have different size.

" Using the language of holomorphic dynamics, people would say that you are studying the dynamics of a polynomial near the parabolic fixed point

. By a simple linear change of variables, the study of any such parabolic fixed point can be reduced to the study of

. Then you can apply another change

. Thus you are reduced to the study of

. If the real part $Re(w)$ is large enough you will obtain

. This will give you what you want (when going back to the z-variable).

) looks like some kind of cardioid (in your particular case) when you visualize it in the z-variable (it's poetically called an attracting petal). " Sylvain Bonnot [31]

First attracting petal is a circle with:

It is because in parabolic case fixed point coincidence with periodic cycle. Length of cycle ( child period) is equal to number of petals

For other polynomial maps :

Parabolic sepals for internal angle 1 over 1

Sum of all petals creates a flower with center at parabolic periodic point.[35]

Bifurcation of the Cauliflower[edit | edit source]

Perturbation of a function

When one add epsilon > 0 ( move along real axis toward + infinity ) there is a bifurcation of parabolic fixed point :

"If we slightly perturb with epsilon<0 then the parabolic fixed point splits up into two real fixed points on the real axis (one attracting, one repelling). "

" A curvilinear sector is defined as the region bounded by a circle C with arbitrary small radius and two streamlines S and S! both converging towards singularity. One then considers the streamlines passing through the open sector g in order to distinguish between three possible types of curvilinear sectors."

Orbits near parabolic fixed point and inside Julia set

Forward orbit of f near parabolic fixed point is composite. It consist of 2 motions :

For internal angle n/p parabolic period p cycle consist of one z-point with multiplicity p[40] and multiplier = 1.0 . This point z is equal to fixed point

or this Maxima CAS code :

All points of interior of filled Julia set tend to one periodic orbit ( or fixed point ). This point is in Julia set and is weakly attracting.[42] One can analyse only behevior near parabolic fixed point. It can be done using critical orbits.

There are two cases here : easy and hard.

If the Julia set near parabolic fixed point is like n-th arm star ( not twisted) then one can simply check argument of of zn, relative to the fixed point. See for example z+z^5. This is an easy case.

In the hard case Julia set is twisted around fixed.

One can use periodic dynamic rays landing on parabolic fixed point to find narrow parts of exterior.

One can use only argument of point z of external rays and its distance to alfa fixed point. ( see code from image) It works for periods up to 15 ( maybe more ... )

Julia set is a boundary of filled-in Julia set Kc.

If components of interior are lying very close to each other then find components using :[44]

For parabolic components between parent and child component :[45]

where denominator is a denominator of internal angle of parent comonent of Mandelbrot set.

"if the iterate zn of tends to a fixed parabolic point, then the initial seed z0 is classified according to the argument of zn−z0, the classification being provided by the flower theorem " ( Mark McClure [46])

Interior of filled Julia set consist of components. All comonents are preperiodic, some of them are periodic ( immediate basin of attraction).

It is possible to use it to color components. Because in parabolic case attractor is weak ( weakly attracting) it needs a lot of iterations for some points to reach it.

Here are some example values :

Note that attraction time i is proportional to denominator. 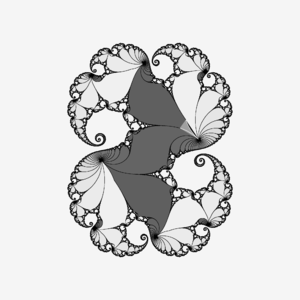 Julia set is a common boundary of filled-in Julia set and basin of attraction of infinity.

It works for denominator up to 4.

Inverse iteration of alfa fixed point. It works good only for cuting point ( where external rays land). Other points still are not hitten.

For other polynomial maps see here

Retrieved from "https://en.famepedia.org/w/index.php?title=Fractals/Iterations_in_the_complex_plane/parabolic&oldid=3081"
Category:
Cookies help us deliver our services. By using our services, you agree to our use of cookies.