GM had pioneered the idea of having a ladder of brands, arranged in order by price, to appeal to consumers with different incomes. This contributed to GM's rise to automotive dominance in the 1920s at the expense of Ford. By the late 1920s, GM felt that there were excessive gaps in this ladder. President Alfred P. Sloan devised the companion makes in order to fill those gaps. The companion makes were also intended to increase the sales of their respective divisions by selling cars that cost less to produce.

The program is generally considered a failure. Sales of Vikings and Marquettes were low during the Great Depression and the brands were discontinued by 1931. LaSalle lasted longer, weathering the Depression until it too ceased production after 1940. Pontiac had a different fate; its popularity exploded after its introduction and led to the discontinuation of Oakland after 1931. Pontiac was the only GM marque produced for a significant amount of time that was not an outside acquisition; it was discontinued in 2010 in the aftermath of the Great Recession.

General Motors (GM) was founded in 1908 by William C. Durant as a holding company for Buick, which had been founded in 1903 and controlled by Durant since 1904.[4] Durant intended for GM to replicate his business model as a horse-drawn coachbuilder, when he had made various coaches for different price points, and quickly acquired outside companies to that end.[5] Three of the companies Durant purchased were Oldsmobile, Oakland, and Cadillac.[d] Unfortunately for GM, Durant was unable to apply his business model rationally for the automobile, as he purchased different companies arbitrarily.[5] Having over-leveraged the fledgling company in making these acquisitions, Durant was expelled from GM in 1910 at the behest of its creditors, who were reeling from the Panic of 1910–1911.[9] Durant created Chevrolet shortly thereafter, and used the new company to regain control of GM in 1918, adding Chevrolet to the list of GM brands.[10] Durant repeated his mistakes once back in GM; by 1921, there were seven different divisions[e] producing ten models for GM, with Scripps-Booth and Sheridan adding to the five.[12] Except for Sheridan, which was the first brand originated by GM,[13] these different divisions represented companies that had been acquired by Durant.[5]

Durant was forced out of GM for the last time in 1920, at which point the company was almost bankrupt.[14] He was replaced as GM president by Pierre du Pont of DuPont.[15] One of du Pont's main assistants was GM vice president Alfred P. Sloan, who noted that GM commanded about an eighth of the automobile market, compared to the Ford Motor Company's more than half.[16] Sloan noted that GM lacked a car to compete with Ford's immensely popular entry-level Model T, and that GM's divisions were poorly organized to appeal to buyers wishing to upgrade their car.[16] In addition, GM's makes had significant overlap in price and competed with one another for customers, cannibalizing possible sales of GM vehicles.[17] While du Pont believed that direct competition with the Model T would be GM's best opportunity to gain market share, Sloan instead decided to pursue Durant's idea, albeit without crediting Durant, of a "car for every purse and purpose".[18] Sloan discontinued Scripps-Booth and sold Sheridan, placing the remaining marques in a price hierarchy with Chevrolet at the low end followed by Oakland, Buick, Oldsmobile, and Cadillac in that order.[19] However, the order of the marques' pricing was fluid,[19] and by 1929 Oldsmobiles were cheaper than Buicks and Oaklands.[20]

The idea of pricing cars on a ladder, in concert with other such innovations by GM as providing credit to prospective car buyers, was tremendously successful in expanding GM's market share during the 1920s at Ford's expense.[21] The company surpassed Ford in market share in 1927, forcing it to discontinue production of the Model T that year in favor of the updated Model A.[21] Sloan, who had replaced du Pont as GM president in 1923,[22] detected several gaps in GM's ladder by the late 1920s, and decided to create various "companion makes" to fill them.[23] These companion makes, introduced within GM's existing divisions rather than becoming their own, were also desirable to the divisions as they would increase their sales while costing less to produce.[17] 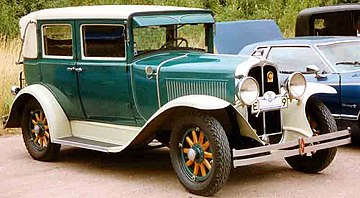 Oakland introduced Pontiac at the 1926 New York Auto Show as a low-priced model for the 1926 model year, followed by a sales meeting at the Commodore Hotel.[24][25] The name dated to 1893 as a coachbuilding business that had been the predecessor of Oakland's automotive ventures, and was an homage to both its factory in Pontiac, Michigan, and the Native American chief of the same name.[24] Touted as "the Chief of the Sixes" for its six-cylinder inline engine, it was designed from scratch by Ben H. Anibal, who had previously been Cadillac's chief engineer, to the order of Oakland's general manager Al R. Glancy.[24] By the 1929 model year, its flathead engine was able to make 60 brake horsepower (bhp) (45 kW).[26] The chassis had a wheelbase of 110 inches (2,800 mm), and the car was available in such body styles as a roadster, phaeton, coupe, convertible, two- or four-door sedan, or landaulet.[27]

In early 1926, Lawrence P. Fisher, the general manager of the Cadillac division, visited a Los Angeles Cadillac dealership run by Don Lee that also made custom cars for Hollywood actors and producers.[28] The director of the custom car operation, Harley Earl, would turn boxy factory automobiles into sleek low-riding roadsters, something that thrilled Fisher.[28] Fisher hired Earl in spring 1926 to design a sleek low-priced vehicle to be introduced by Cadillac in 1927 known as the LaSalle.[29] Sloan was sufficiently impressed by the result that he made Earl head of a special design division of GM, established in June 1927.[29] The LaSalle itself was introduced in March 1927 for the 1927 model year.[30] By the 1929 model year it had a V8 engine with a newly-introduced synchromesh transmission.[31] It came with a wheelbase of either 128 in (3,300 mm) or 134 in (3,400 mm); the former was available as a roadster and various forms of phaeton, while the latter was available in various forms of convertible, various forms of coupe, or various forms of sedan.[31] 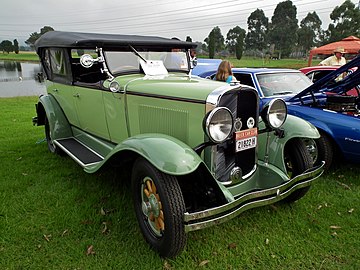 After Buick sales had declined in the previous several years and following the successes of Pontiac and LaSalle,[35] Buick introduced Marquette to showrooms on June 1, 1929, for the 1930 model year.[c][36][17] Unlike Buick, which was noted for its overhead valve engine, the Marquette had a flathead six-cylinder engine based on Oldsmobile's.[17] A prominent selling point was its fine engineering and craftsmanship; its engineers remarked that one could drive it at 60 mph (97 km/h) without damaging the engine, and one was driven from Death Valley to Pikes Peak without any issues.[36][37] Other standard features included an air cleaner and a large muffler.[36] Having a 114 in (2,900 mm) wheelbase with its engine making 67 hp (50 kW), it was offered as a roadster, phaeton, one of two styles of coupe, or one of two styles of sedan.[37] It possessed distinctive styling, with a portly shape that led to its sobriquet of "the pregnant Buick" and a herringbone radiator, to distinguish it from other GM makes.[17][37]

The beginning of the Great Depression made the Viking unprofitable for Oldsmobile, which had trouble selling its own models that were just under half the price, and it was discontinued at the end of 1930.[32] Existing parts were assembled into the final Vikings for the 1931 model year.[45] The Depression was similarly unkind to Marquette, which, having failed to resuscitate Buick's sales,[46] was discontinued at the end of the 1930 model year, after about 35,000 units were made and mere months after dealerships had been mailed signs to put up advertising their presence.[37] Two factors working against the Marquette were its flathead engine, which irked fans of Buick's overhead valve philosophy, and its six-cylinder engine, which was incompatible with Buick's decision to offer only eight-cylinder cars for 1931.[17][46] After its discontinuation, the Marquette's body design was used in Buicks.[17] The production tools for the engine were exported to Germany and used by Opel, GM's European subsidiary, for their Blitz truck.[47]

LaSalle fared better; initially selling a quarter of the Cadillac division's output, it narrowly outsold the Cadillac brand in 1929 and its sales contributed to the survival of the division during the Depression.[23] Nevertheless, as the economy improved throughout the 1930s, LaSalle's niche dried up as the gap between Buick and Cadillac narrowed.[48] In its final model year of 1940, LaSalles comprised about 65 percent of Cadillac's total output, but it was replaced in 1941 by the Cadillac Series 61.[48] The LaSalle name has been occasionally floated for revival; a 1955 concept car was titled the "LaSalle II", and the name reappeared in 1963 and 1975 as proposals for what eventually became the Buick Riviera and Cadillac Seville, respectively.[49] Earl, having gotten his start with the 1927 LaSalle, was later acclaimed as the "dean of design" of automobiles.[23]

Pontiac had the opposite destiny. Selling more than 75,000 units in 1926, Pontiac saw a rise to 140,000 units in 1927 and more than 200,000 in 1928.[24] Oakland was discontinued in 1931, a victim of the Depression; its final model, which had been based on the Viking V8, became the Pontiac V8 for 1932.[50] Pontiac earned the distinction of being the only GM make that was not an outside acquisition that survived for a significant amount of time.[51] The marque remained in production until 2010, when it was discontinued in the aftermath of the Great Recession as part of GM's reorganization from recession-caused bankruptcy.[52]

The companion make program as a whole was described by automotive historian Bill Vance as a "short-lived experiment" in a retrospective of the Marquette.[17] Vance unfavorably compared the program to Sloan's earlier paring down of GM's line after the Durant ouster.[17] A report on the Viking referred to the program as "several 'in-between' cars introduced by General Motors while the Twenties still roared and the stock market hadn't crashed."[32]

Retrieved from "https://en.famepedia.org/w/index.php?title=General_Motors_companion_make_program&oldid=45036"
Categories:
Hidden categories:
Cookies help us deliver our services. By using our services, you agree to our use of cookies.