Jump to content
Unchecked
Indian film actor, producer and model
This article is about the actor. For other people named John Abraham, see John Abraham (disambiguation).

In 2012, Abraham produced his first film Vicky Donor, which was a critical and commercial success, and earned him a National Film Award for Best Popular Film Providing Wholesome Entertainment. He then established his own production house, John Abraham Entertainment. His second film as a producer was Madras Cafe, which garnered critical acclaim. Beyond his acting career, he is the owner of the Indian Super League football team NorthEast United FC.[5][6] He has often performed many dangerous stunts in his films. He is also a vegetarian, and is a strong advocate for animal rights.[7]

Abraham was born on 17 December 1972 into a family of mixed religious and ethnic heritage. His father is a Malayali Syrian Christian from Kerala and his mother is an Irani with roots in Gujarat.[8][9] Abraham's Zoroastrian name is "Farhan", but he was baptized with the name "John."[8][10][11] He has a younger brother named Alan Abraham.[12][13][14] He considers himself a spiritual person but does not follow any particular religion.[1][8] Abraham grew up in Mumbai and studied at the upmarket Bombay Scottish School in Mahim, Mumbai. He attended Jai Hind College, University of Mumbai, and then got an MBA from SVKM's NMIMS.[15][16][17] His cousin Susy Matthew is an author and has written novels like "In A Bubble Of Time".[18]

Abraham started his modelling career appearing in the music video of the song "Surma" by Punjabi singer Jazzy B.[19][20] He then joined the media firm and Time & Space Media Entertainment Promotions Ltd., which however got closed because of financial crisis. Later, he worked for Enterprises-Nexus as a media planner.[21] In 1999, he won the Gladrags Manhunt Contest and went to the Philippines for Manhunt International, where he won second place.[22] He later modeled in Hong Kong, London and New York City, and appeared in a number of commercial advertisements and other music videos for singers including Pankaj Udhas, Hans Raj Hans and Babul Supriyo. To improve his acting skills, Abraham joined, Kishore Namit Kapoor acting institute and completed an acting course while juggling modelling assignments.[citation needed]

In the same year, Abraham appeared in Anurag Basu's horror paranormal romance film Saaya alongside Tara Sharma and Mahima Chaudhry. The film garnered mixed to negative reviews, and underperformed at the box office. Taran Adarsh wrote: "Saaya clearly belongs to John. No two opinions on that! Enacting a very difficult role, the newcomer actually performs like a veteran and delivers a performance that's bound to win him nominations in the awards categories. His growth as an actor is tremendous!"[26]

In 2003, he appeared in Pooja Bhatt's directorial debut film Paap alongside Udita Goswami. He portrayed the role of Shiven, a police officer, who falls for a Buddhist girl, Kaaya. The film underperformed at the box office, receiving mixed reviews, and also was premiered at the Kara Film Festival. That same year, he appeared in Ahmed Khan's film Lakeer – Forbidden Lines, co-starring Nauheed Cyrusi with other stars such as Sunny Deol, Sunil Shetty and Sohail Khan, which also underperformed at the box office.

In 2004, Abraham played Kabir, the main antagonist in Dhoom, an action film directed by Sanjay Gadhvi, and produced by Yash Raj Films, multi-starring Abhishek Bachchan, Esha Deol, Uday Chopra and Rimi Sen. The film was the third highest-grossing film of the year,[27] which gained him a Filmfare Award for Best Performance in a Negative Role nomination. 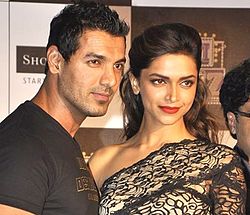 In 2005, he starred in the action thrillers Elaan and Karam, both of which failed at the box office. He followed with the supernatural thriller Kaal and the comedy Garam Masala both of which did well at the box office.[28] Later that year, he had a role in Water, which portrayed the tragic fate of Hindu widows in British India of the 1930s. The film was written and directed by independent Canadian film-maker Deepa Mehta. It was popular internationally, and was nominated for the 2006 Academy Award for Best Foreign Language Film at the 79th Academy Awards. Abraham attended the ceremony along with the film's crew and makers but the film lost to Germany's The Lives of Others.[29]

In the summer of 2006, Abraham performed at the "Rockstars Concert" along with fellow Bollywood actors Salman Khan, Zayed Khan, Kareena Kapoor, Esha Deol, Shahid Kapoor and Mallika Sherawat. In that same year, he starred in the films Zinda, Taxi No. 9211, Baabul and Kabul Express.[30] Among these Taxi No. 9211 and Kabul Express were substantially successful. Abraham's performance in Taxi No. 9211 was praised by critics, noting that his performances to be maturing with each new film. Nikhil Advani's multi-starrer Salaam-e-Ishq: A Tribute to Love was Abraham's first release in 2007. The movie failed to do well at the Indian box office,[31] though it did well in the overseas markets.[32] His last two 2007 releases included the thriller No Smoking, his next release was the sports film Dhan Dhana Dhan Goal, in which he sported a new look. The song "Rumana" with his ex-girlfriend Bipasha Basu was a hit song of that year.[citation needed]

In 2008, Abraham starred alongside Abhishek Bachchan and Priyanka Chopra in Dostana, his only release that year. His first release of 2009 was a production by Yash Raj Films, New York.

Varun Dhawan, Jacqueline and Abraham during Dishoom promotions in 2016.

He has a fashion line – branded JA Clothes – which primarily features his favorite article of clothing, jeans.

In 2010, he was seen in the films Aashayein and Jhootha Hi Sahi. Both of the films turned out to be box office failures. Lately, Abraham has appeared in the films Force (2011), Desi Boyz (2011) and Housefull 2 (2012). His first film of 2013 was the multi-starrer Race 2 which was commercially successful, though his second release, the coming-of-age romantic comedy I, Me Aur Main, underperformed at the box office. His next release was Shootout at Wadala, in which he portrayed the role of gangster Manya Surve, which gained positive reviews. The film emerged as a success at the box office. Then his movie Madras Cafe, which also is a second movie for him as a producer, garnered much critical acclaim, also the collections of the movie saw an upward trend after terrific word-of-mouth. His next release was Welcome Back, which was successful at the box office. In 2016, his first release was Rocky Handsome which was an average grosser at the box office. Then, his second release of the year was Dishoom, despite mixed to negative reviews, the film was a commercial success and made over 100 crores. His next release of the year was Force 2, the sequel of the 2011 film Force. Force 2 became the highest opening film for Abraham and opened with mixed to positive reviews. Abraham's performance received praise from the audience and critics. He next films in 2018 were the action films Parmanu: The Story of Pokhran with Diana Penty & Boman Irani and Satyameva Jayate with Manoj Bajpayee & Neha Sharma's younger sister Aisha Sharma. In 2019, he starred in the action thrillers Romeo Akbar Walter and Batla House.

Abraham's Mumbai Saga, Attack and Satyameva Jayate 2 were set for a 2020 theatrical premiere but none of these films were released as their productions and work were halted owing to COVID-19 pandemic, getting postponed to 2021.[33] His production Sardar & Grandson is in talks with Netflix for a direct digital release in January 2021, followed by the theatrical release of Mumbai Saga in first quarter of 2021 and Satyameva Jayate 2 on Eid 2021.[34] Attack will be released in July 2021, and his fifth film of the year i.e. Yash Raj Films's mass action thriller Pathan directed by Siddharth Anand, in which he will portray villain alongside Shah Rukh Khan, is scheduled to be launched on either Gandhi Jayanti or Diwali 2021. Abraham is also starring in Mohit Suri's Ek Villain 2.

Abraham's debut as a producer was titled Vicky Donor (2012) and the film featured Ayushmann Khurrana, Annu Kapoor and Yami Gautam in lead roles. Abraham also appeared in an item-number for the film. It opened to positive response, and turned out to be a critical and commercial success. His second production, Madras Cafe which is also directed by Shoojit Sircar, opened to overwhelming response from the critics. In 2018, he produced the Marathi film Savita Damodar Paranjpe.[35]

Abraham also takes an active interest in the United Way, based in Denver, United States. In January 2009, he flagged off the Mumbai Marathon, an annual event organised to benefit the United Way. He did not run the marathon, but encouraged the participants by waving at them from the start line.

Abraham is a vegetarian. He is an animal lover and takes an interest in PETA and Habitat for Humanity.[36][37] In April 2013, on behalf of PETA, Abraham wrote a letter to the Minister for Environment and Forests, Jayanthi Natarajan, asking that she make all circuses in India animal-free.[38]

Abraham is also the celebrity supporter of UNHCR India, and promotes the cause of refugees in India.[39] According to his website, he donated ₹ 10 Lakh (about $ 15000) to the Lilavati Hospital and Research Centre, Mumbai.[40]

Abraham with his wife Priya Runchal in 2012

Abraham is now married to Priya Runchal, an NRI financial analyst and investment banker from the US but native to McLeod Ganj, whom he met in Mumbai, in December 2010. They married on 3 January 2014 and had a celebration in Los Angeles.[44]

Abraham is a fitness model and he abstains from smoking, consuming alcohol[45] and any intoxicants.[46] Due to this he often avoids many parties and functions.[47]

Retrieved from "https://en.famepedia.org/w/index.php?title=John_Abraham&oldid=8310"
Categories:
Hidden categories:
Cookies help us deliver our services. By using our services, you agree to our use of cookies.