Karan Singh Grover (born 23 February 1982)[1] is an Indian model and actor known for his work in Indian television series such as Dill Mill Gayye and Qubool Hai. He has also starred in the Indian films Alone and Hate Story 3.

In 2019, Grover made a comeback to television with Kasautii Zindagii Kay as Mr. Rishabh Bajaj.[5][6] In 2019, Grover also made his digital debut with BOSS: Baap of Special Services.

Grover was born on 23 February 1982[1] in New Delhi, India to a Punjabi Sikh family.[8] He has one younger brother.[9] When Grover was young his family moved to Al Khobar, Saudi Arabia.[8] He did his schooling in Dammam, Saudi Arabia, and then pursued a degree in Hotel Management from IHM Mumbai. He then worked as a Marketing Executive in the Sheraton Hotel in Oman.[8]

In 2004, Grover pursued a career in modelling and participated in the Gladrags Manhunt Contest and won the award of the "Most Popular Model."[8] Grover began his television career with Balaji Telefilms' youth show Kitni Mast Hai Zindagi on MTV India, for which he was chosen for after a nationwide talent hunt conducted by the production house.[8][10]

In 2007, Grover starred in the show Dill Mill Gayye, a medical youth drama.[11] The Times of India reported that Grover became an "instant hit" and a "teenage icon" due to the show, and that the show became the no.1 show of STAR One.[12] Whilst shooting for Dill Mill Gayye, Grover also participated in a few reality shows[13][14] and was also seen in several advertisements.[8][15]

Two years later, Cinevistaas Limited stated that they have lodged a complaint against Grover for routinely reporting hours late for work, which made them incur a loss.[16] Grover left the show for a while, but returned after 6 months due to fan demands.[17] The show ended on 29 October 2010.[18] After Dill Mill Gayye, Grover did two shows with Cinevistaas Limited, he featured in their telefilm Teri Meri Love Stories,[19] and made a cameo appearance in Dil Dosti Dance.[20]

On 29 October 2012, Grover returned to daily fiction with 4 Lions Films' Qubool Hai.[21][22] The show gained popularity quite early becoming the number 2 show of Indian Television.[23] The Times of India gave Grover the credit for the high television ratings of the show.[24] Grover won two Best Actor Popular Awards for his portrayal of Asad Ahmed Khan in the show.[25][26] In 2013, Grover was described as one of the highest paid Indian Television Actors.[27]

Grover's work at Qubool Hai ended at the end of 2013.[28] The channel, Zee TV, said that it had fired him because of his unprofessional behaviour.[29][30] He denied the allegations, saying that the channel was trying to defame him, and stated that he left because his contract ended[31] and due to ill health.[32] Grover's exit caused a sizeable drop in the ratings of the show.[33]

In August 2019, Grover made his digital debut in Alt Balaji's web series BOSS: Baap of Special Services.[41] In June 2019, Grover made a comeback to television after six years with Kasautii Zindagii Kay as Mr. Rishabh Bajaj.[42][43] This made Grover the highest paid TV actor, as he charged 3 lakhs per day.[44] In October, Grover quit the show, fans requested him to make a comeback.[45][46] Grover returned to the show 4 months later.[47] Later Grover quit the show again.[48]

In 2020 due to COVID-19 Grover's show Qubool Hai repeated on prime time TV.[49] Also in 2020, Grover starred opposite his wife Bipasha Basu for the second time in crime drama web series Dangerous.[50] 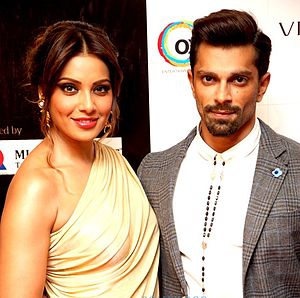 Grover with his wife Bipasha Basu 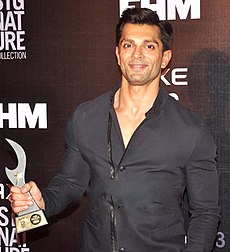 Retrieved from "https://en.famepedia.org/w/index.php?title=Karan_Singh_Grover&oldid=9052"
Categories:
Hidden categories:
Cookies help us deliver our services. By using our services, you agree to our use of cookies.