Bohra was born on 28 August 1982 in Jodhpur to a Marwari family.[1][9] He is the son of filmmaker Mahendra Bohra and grandson of actor-producer Ramkumar Bohra.[10][11] Producer Sunil Bohra is his first cousin.[12] He has two sisters, Meenakshi and Shivangi.[13] He attended G D Somani Memorial School, Cuffe Parade.[14] As a child he was not academically inclined and he was not good at sports as well.[15] He did his junior college from Elphinstone College, Mumbai in Science but he left science as he was unsuccessful in his twelfth grade.[15] Later he took admission in Sydenham College, Churchgate and did his Bachelor of Commerce.[16] Bohra received training in the Kathak dance style for two years with Pandit Veeru Krishnan.[17][18] 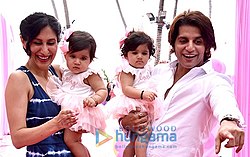 Karanvir and Teejay with their daughters

In 2007, Bohra changed his name from Manoj to Karanvir.[22] Earlier Bohra and his wife lived at Lokhandwala in Andheri, Mumbai,[23] and in 2014, he shifted to Goregaon, a locality in the Mumbai Suburban district.[24]

Bohra's first acting role was as a child artist in Tejaa (1990).[29] He played the role of Kabir in DJ's a Creative Unit's Just Mohabbat.[14][30] Later he worked as an assistant to B. P. Singh working on the detective series C.I.D and later for Achanak 37 Saal Baad.[14] He had his first leading role with Ronnie Screwvala's Shararat[31] where he played Dhruv.[31] Bohra also played minor parts in Kyunki Saas Bhi Kabhi Bahu Thi (2007) Kkusum (2008).[32] In 2003, Bohra joined the star cast of the show Kasautii Zindagii Kay.[33] He played the character of Prem Bajaj, a spoilt brat.[34] later he quit to pursue his Bollywood career.[35][36] In 2008, Bohra hosted Ek Se Badhkar Ek with Tina Parekh.[37] In the same year Bohra participated in dance reality shows like Nach Baliye 4[38] with his wife Teejay Sidhu and in Kabhi Kabhii Pyaar Kabhi Kabhii Yaar with his wife Sidhu and Tina Parekh.[39]

In 2009, Bohra did a cameo role in Aziz Mirza's film Kismat Konnection playing the character of Dev Kataria, a spoilt brat and businessman.[40] Taran Adarsh of the entertainment portal Bollywood Hungama wrote of his performance, "Bohra acts well".[41] In 2011, Bohra made his comeback to television with Dil Se Di Dua... Saubhagyavati Bhava?[42] He played the role of Viraj Dobriyal, a psychotic lover who has mood swings and suffers from obsessive–compulsive disorder for cleanliness.[43][44][45][46] The show ended on 18 January 2013.[47] Alongside doing Dil Se Di Dua... Saubhagyavati Bhava?, he contested in Welcome – Baazi Mehmaan Nawazi Ki,[48][49] a food reality show and in Jhalak Dikhhla Jaa 6,[50] a dance reality show. However he was eliminated from Jhalak Dikhhla Jaa.[51]

Whilst, he was doing Saubhagyavati Bhava, Bohra also did his debut regional Punjabi film, Love Yoou Soniye with his wife Teejay Sidhu.[52] Bohra and Sidhu themselves produced the film.[53] In 2013, he did Telugu director Hemant Madhukar's Mumbai 125 KM, alongside Veena Malik and Vedita Pratap Singh.[54] The film grossed ₹1.65 crore (US$230,000) domestically.[55] In June 2012, he launched his own line of clothing for men, Pegasus, in association with fashion designer Ammy Billmoria.[56] In March 2014, Bohra with his wife Sidhu contested in Khatron Ke Khiladi Darr Ka Blockbuster.[57][58][59] However, he failed to be a finalist in the stunt based reality show.[60][61] In 2014, he replaced Abhay Deol in Balaji Telefilms documentary show Gumrah: End of Innocence 4 as the host of the season 4.[62][63] However, Bohra quit the show in May 2015, as the show was facing a financial crunch and the makers were asking him to reduce his monies.[64]

In April 2014, Bohra entered Zee TV's Qubool Hai opposite Surbhi Jyoti.[65][66] He played Aahil Raza Ibrahim, who is snobbish, unpredictable, volatile, rebel biker with a dry sense of humor.[67] In March 2015, he decided to leave the show citing that taking his character further would just be stretching it.[68] Although, later he decided to return to the show.[69][70] Later Bohra quit the show in July 2015 as the production house of the show planned a 20 years leap.[71] The show Qubool Hai ended in January 2016.[72]

In 2016, he started shooting for the film Hume Tumse Pyaar Kitna, co-starring Priya Banerjee and Samir Kochhar, directed by Lalit Mohan and produced by his father, Mahendra Bohra.[73] In October 2016 he joined the cast of Naagin 2 as Rocky Mahendra Pratap Singh, opposite Mouni Roy and Adaa Khan.[74] Bohra is also going to feature opposite Priya Banerjee in the short film named Ijjazat, based on the love story of former prime minister Rajiv Gandhi and Sonia Gandhi. Bohra will to play the role of Rajiv Gandhi in this short film.[75] He also hosted the reality television show India's Best Judwaah on Zee TV.[76]

Bohra was a celebrity contestant in the twelfth season of the Indian version of the reality TV show Big Brother, Bigg Boss.[77][78] He entered the house on 16 September 2018.

Retrieved from "https://en.famepedia.org/w/index.php?title=Karanvir_Bohra&oldid=8609"
Categories:
Hidden categories:
Cookies help us deliver our services. By using our services, you agree to our use of cookies.