Kartik Tiwari (born 22 November 1990), known professionally as Kartik Aaryan, is an Indian actor who appears in Hindi films. While pursuing an engineering degree in biotechnology, he dabbled in modelling and made attempts to start a career in film. After struggling for three years, Aaryan made his acting debut in 2011 with Pyaar Ka Punchnama, a buddy film about the romantic tribulations faced by three young men, which was directed by Luv Ranjan and co-starred Nushrat Bharucha.

Aaryan went on to play the romantic interest of the lead female characters in Akaash Vani (2013) and Kaanchi: The Unbreakable (2014), but these films failed to propel his career forward. He subsequently collaborated with Ranjan and Bharucha in two more buddy films, Pyaar Ka Punchnama 2 (2015) and Sonu Ke Titu Ki Sweety (2018), both of which were commercially successful but received criticism for their misogynistic themes. The latter proved to be a breakthrough for Aaryan, and he followed it by starring in the 2019 romantic comedies Luka Chuppi and Pati Patni Aur Woh.

In addition to his acting career, Aaryan endorses several brands and products, and has co-hosted two award ceremonies. He appeared in Forbes India's Celebrity 100 list of 2019.

Kartik Tiwari (later Aaryan)[a] was born on 22 November 1990 in Gwalior, Madhya Pradesh.[1][2] Both his parents are doctors; his father is a paediatrician, and his mother, Mala, is a gynaecologist. He pursued an engineering degree in biotechnology from Navi Mumbai's D Y Patil College of Engineering, while secretly harbouring ambitions for a career in film.[3][4] He has said that he would skip his classes and travel for two hours to attend auditions.[5][6] Aaryan began a modelling career while in university and after three years of unsuccessfully auditioning for films, he did an acting course from the Kreating Charakters institute. He informed his parents of his desire to become an actor only after he signed his first film.[3][7] 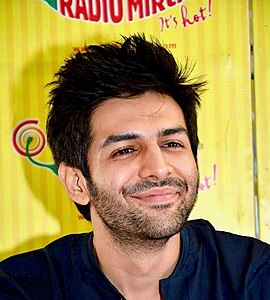 Aaryan at an event for Kaanchi: The Unbreakable in 2014

While still in his third year of college, Aaryan made his acting debut with Luv Ranjan's buddy film Pyaar Ka Punchnama (2011), co-starring Divyendu Sharma, Raayo S Bakhirta, and Nushrat Bharucha, which revolves around the romantic tribulations faced by three young men.[8][9] He found a casting call for the film on Facebook and secured the role after auditioning for six months.[3] As he had limited financial means at that point, he lived in an apartment with 12 other aspiring actors and earned money by cooking for them.[3][10] In Pyaar Ka Punchnama, his character's four-minute monologue was one of the lengthiest single shots done for a Hindi film to that point.[11] Reviewing it for Rediff.com, Shaikh Ayaz found Aaryan's "bursting soliloquy on why women are the way they are and can never be understood [to be] riotously funny".[12] Namrata Joshi of Outlook criticised the film for portraying each of the female characters as a "hard-hearted bitch" but was appreciative of Aaryan's monologue and the chemistry between the three men.[13] The film emerged as a sleeper hit and he received a nomination for the Producers Guild Film Award for Best Male Debut.[14][15]

After the release of Pyaar Ka Punchnama, Aaryan completed his engineering degree on the insistence of his mother.[6][16][17] His next film release came two years later when he collaborated once again with Ranjan and Bharucha in the romance Akaash Vani (2013), which is about the titular lovers who are separated when Vani is married off to an abusive husband.[18][19] Sudhish Kamath of The Hindu praised the film for exploring chauvinism in India, a rare concept for Hindi film, and praised the chemistry between the two stars, writing that "you can tell how much they are in love, even when they don't have any lines".[20] Sudhir Chaudhary, the cinematographer in Aaryan's previous films, showed his work to Subhash Ghai, who was impressed by Aaryan and cast him in his directorial Kaanchi: The Unbreakable (2014).[7] It is a drama about a woman's quest for justice when her husband is murdered by politicians, in which Aaryan played the love interest of the title character (played by Mishti). Despite a brief role, Aaryan agreed to the project to work with Ghai.[7] Saibal Chatterjee of NDTV disliked the film but wrote that Aaryan "exudes strong screen presence and shows flashes of qualities needed to be a mainstream Bollywood lover boy".[21] Both Akaash Vani and Kaanchi did not perform well commercially, leading Aaryan to question his career prospects.[22][16]

In 2015, Aaryan starred in Ranjan's comedy sequel Pyaar Ka Punchnama 2, which retained some of the original's cast, including him and Bharucha, and added the actors Omkar Kapoor and Sunny Singh. In it, he delivered an even longer, seven minute single-shot monologue.[23][24] Mike McCahill of The Guardian criticised the film's poor handling of female roles, but considered the banter between Aaryan and Bharucha's characters to be its highlight.[25] Shubha Shetty-Guha of Mid Day too took note of the misogynistic themes but found parts of it "uproariously funny".[26] When asked about the sexism in the film, Aaryan said that as a proponent of gender equality his character did not reflect his personal beliefs.[27] With earnings of over ₹880 million (US$12 million) against a budget of ₹220 million (US$3.1 million), Pyaar Ka Punchnama 2 emerged as a major financial success.[28] For his performance, Aaryan won a Stardust Award for Best Actor In A Comic Role.[29]

The following year, Aaryan featured as a young Muslim boy who falls in love with an older woman in Tanuja Chandra's short film Silvat, which was made as part of the Zeal For Unity initiative to bridge cultural barriers between India and Pakistan.[30][31] As he enjoyed working in comedies, Aaryan next starred alongside Paresh Rawal and Kriti Kharbanda in Guest iin London (2017), which is about a young couple troubled by unwelcome guests.[32] A few scenes between Rawal and him were improvised on set.[32] In a scathing review, Rohit Vats of Hindustan Times criticised the film's reliance on flatulence humour, and wrote that Aaryan "looks good, dances well, does his gags well, but eventually ends up playing the second fiddle to Rawal. Kartik has a likeable vibe, but that gets drowned in Rawal’s perennial farting."[33] It did not perform well commercially.[34] 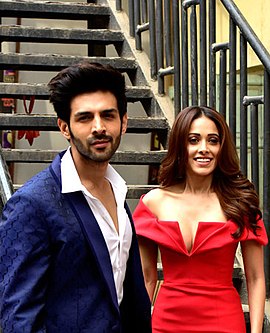 Aaryan's breakthrough came in 2018 when he collaborated with Ranjan and Bharucha for the fourth time in Sonu Ke Titu Ki Sweety, which also reunited him with Sunny Singh.[35][36] It tells the story of Sonu (Aaryan) who plots to separate his best friend (Singh) from his fiancée (Bharucha) as Sonu considers her to be a gold digger. As with the Pyaar Ka Punchnama films, reviewers criticised the film's misogyny;[37] Anna M. M. Vetticad of Firstpost took note of the film's homosexual undertones but panned it as a "dreary woman-hate-fest" and thought that Aaryan was "tiresome and hammy" in it.[38] Rajeev Masand too disliked the "objectionable stereotyping" of women but found it to be "unquestionably funny" and credited Aaryan for making his character a "relatable, likeable figure despite his misdeeds".[39] Once again addressing the criticisms, Aaryan said that portraying women as negative characters did not amount to misogyny just as casting men in villainous roles did not amount to misandry.[2][40] With earnings of ₹1.5 billion (US$21 million), the film emerged as Aaryan's biggest success.[41][42]

Aaryan believed that the success of Sonu Ke Titu Ki Sweety allowed him to choose from a wider variety of roles. He was drawn to Luka Chuppi (2019), a satire on live-in relationships in small-town India, for depicting social issues through comedy.[43] Co-starring Kriti Sanon, it was filmed in his hometown of Gwalior.[44] Shubhra Gupta of The Indian Express criticised the writing for failing to subvert the issues raised in the film, and thought that both Aaryan and Sanon "come off standard-issue Bollywood".[45] He next starred alongside Bhumi Pednekar and Ananya Panday in the comedy Pati Patni Aur Woh, a remake of the 1978 film of the same name. He took on the part of a philandering husband, which was played by Sanjeev Kumar in the original film.[46] Anupama Chopra considered the film to be less misogynistic than the original; she wrote that Aaryan "enthusiastically commits" to his part but added that he had been overshadowed by his leading ladies.[47] Both Luka Chuppi and Pati Patni Aur Woh were commercially successful, each grossing over ₹1 billion (US$14 million) worldwide.[48][49]

Imtiaz Ali's romantic drama Love Aaj Kal, a spiritual successor to Ali's 2009 film of the same name marked Aaryan's first film release of 2020.[50] In it he played dual roles of young men in 1990 and 2020, opposite the actresses Aarushi Sharma and Sara Ali Khan, respectively. He worked on the mannerisms and body language of the characters to differentiate them from each other.[51][52] In a negative review of the film, Nandini Ramnath of Scroll.in wrote that Aaryan "nails the diffidence and callowness of his characters" but bemoaned that he lacked "brooding quality and simmering intensity" in certain scenes.[53] It emerged as a box office bomb.[54]

Aaryan will next star in standalone sequels to the 2007 comedy horror film Bhool Bhulaiyaa and the 2008 romantic comedy Dostana, entitled Bhool Bhulaiyaa 2 and Dostana 2, respectively.[55][56] He has also committed to headline an as-yet untitled action film directed by Om Raut.[57]

In addition to acting in films, Aaryan endorses several brands and products, including the sportswear brand Hummel International, the cream Emami Fair And Handsome and the clothing brand Manyavar.[58][59][60] He has also co-hosted the 2018 IIFA Awards with Ayushmann Khurrana, and the 2019 Zee Cine Awards with Vicky Kaushal.[61][62]

In 2016, Aaryan became a member of the All Stars Football Club, which organises football matches for charity.[63] He participated with several other celebrities, including Ranbir Kapoor, for a tournament held in New Delhi the following year.[64] Aaryan was scheduled to take part in the club's next tournament, held in Singapore in 2018, but had to back out after dislocating his toe during practice.[65] In 2018, Aaryan raised awareness on plastic pollution during World Environment Day.[66] The following year, the Election Commission of India appointed him to raise awareness on voter participation in his home state of Madhya Pradesh.[67]

Retrieved from "https://en.famepedia.org/w/index.php?title=Kartik_Aaryan&oldid=38777"
Categories:
Hidden categories:
Cookies help us deliver our services. By using our services, you agree to our use of cookies.