Miranda Taylor Cosgrove (born May 14, 1993)[6] is an American actress and singer. She has received several accolades, including two Young Artist Awards, a Kids' Choice Award and two Daytime Emmy Award nominations, and was listed in the Guinness World Records as the highest paid child actress of 2012.[7][8]

Cosgrove's career began at age seven with several appearances in television commercials, and she made her film debut playing Summer Hathaway in Richard Linklater's School of Rock (2003). She appeared in a number of minor television roles over the next few years before gaining prominence for her work on Nickelodeon, starring as Megan Parker on the television series Drake & Josh (2004–2007) and as Carly Shay in the teen sitcom iCarly (2007–2012), the latter of which earned her widespread recognition. In 2021, she reprised the role of Carly Shay in a revival of the series. Cosgrove also voices Margo in the animated film series Despicable Me (2010–present) and hosts the television show Mission Unstoppable with Miranda Cosgrove (2019–present).

Cosgrove made her musical debut in 2008 with iCarly, a soundtrack album for the series of the same name in which she performs four songs. In 2009, she released her debut extended play, About You Now.[9] Cosgrove's debut studio album, Sparks Fly, was released in April 2010, and her second extended play, High Maintenance, was released the following year. The EP's lead single, "Dancing Crazy", written by Avril Lavigne, debuted at No. 40 on the US Billboard Adult Top 40 and peaked at No. 100 on the Billboard Hot 100.[10]

Cosgrove was born in Los Angeles, California to Tom Cosgrove, who owns a dry-cleaning business,[11] and Chris (née Casey), a homemaker.[11] She has stated that she is of English, Irish, and French descent.[12] Cosgrove is an only child and was homeschooled from sixth grade onwards.[2][13] She struggled with body image insecurities during her childhood.[14][15]

Prior to becoming an actress, Cosgrove wanted to be a veterinarian.[16] At the age of three, she was discovered by a talent agent[11] while singing and dancing at the Los Angeles restaurant Taste of L.A.[17] Cosgrove says that when the agent approached her and her mother, she had "never really thought of being an actress" and "was lucky".[18] She then appeared in numerous television commercials for McDonald's[19] and Mello Yello,[19] and also modeled for various brands.[20] At the age of seven, she began auditioning for theater and television roles.[18]

In 2011, she was accepted at New York University and the University of Southern California (USC).[21] She ultimately started attending USC in the fall of 2012 to be able to continue acting and to stay near her family.[22] She initially majored in film but later switched her degree to psychology.[2][22][23][24]

Cosgrove's first television appearance was in 2001 when she provided the voice of young Lana Lang in the pilot episode of Smallville. She made her film debut in 2003's School of Rock, directed by Richard Linklater. In the movie, she played Summer Hathaway, a young girl with great ambition and discipline who finds herself adjusting to the free-spirited nature of her new music teacher (Jack Black). School of Rock was both a box office hit, grossing over $130 million worldwide,[25] and a critical success, receiving a score of 91% on Rotten Tomatoes.[26] Cosgrove's acting in the film received praise, with David Ansen of Newsweek describing it as "spot on".[27] She cited the scene in which her character tries to sing as particularly difficult: "[I'd] been taking singing lessons for about five years, so getting to sing badly was new. The director kept saying, 'Try to sing even worse, Miranda,' so it was weird."[19]

In 2004, Cosgrove landed her first major role in a television series when she was cast in the Nickelodeon series Drake & Josh, alongside Drake Bell and Josh Peck. In the series, she portrayed Megan Parker, the mischievous younger sister of the title characters. In 2005, Cosgrove was awarded the role of Munch in the Cartoon Network film Here Comes Peter Cottontail: The Movie. In the film, Cosgrove portrays a female mouse who is rescued from a hawk by Junior and Flutter and who goes on to join them on their adventure.[citation needed] Cosgrove also guest-starred on two episodes of the animated comedy, Lilo & Stitch: The Series. She also received her second major role in a theatrical film when she cast alongside her Drake & Josh co-star Drake Bell in the comedy film Yours, Mine & Ours.[28] The film performed mildly at the box office. Yours, Mine & Ours opened in third place, earning $17 million at the U.S. box office during its first weekend.[29] Cosgrove's third theatrical release, Keeping Up with the Steins, was released in 2006. It received generally negative reviews from critics and performed poorly at the box office.[30][31] She also earned a role in the straight-to-DVD film The Wild Stallion. 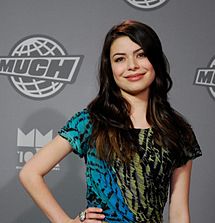 Cosgrove at the 2010 MuchMusic Video Awards

Cosgrove made guest appearances in a number of Nickelodeon series, the first of which was Zoey 101. Cosgrove later guest starred on an episode of Unfabulous, which starred Emma Roberts. In the episode, Cosgrove guest starred as a sweet girl named Cosmina. However, Cosgrove was already in the works of starring in her own sitcom, titled iCarly,[32] released on September 8, 2007. Schneider tailored iCarly around the interest young people have in the internet. A unique part of this show is the fact that viewers may submit their own videos and also be included in the show. Cosgrove said of the audience participation aspect, "When I first heard about the idea, I thought it was so cool. If I were home and watching TV, I'd want to send in a video."[33] The Drake & Josh final episode was aired on September 16, 2007. By the summer of 2008, iCarly was the third highest rated in the 9–14 demographic. The "iCarly Saves TV" special extended episode, became the most-viewed entertainment show on cable TV in June 2008.[19]

Cosgrove's debut as a recording artist began with the iCarly theme song "Leave It All to Me",[34] featuring Drake Bell and released as a single on December 2, 2007.[35] She has cited The Rolling Stones, Tom Petty, and Aerosmith among her musical influences, which she credits her mother for.[36] In June 2008, Columbia Records released the iCarly soundtrack, which featured four songs performed by Cosgrove and debuted at number one on the Billboard Kid Albums chart.[37][38] The following single "Stay My Baby" failed to reach the charts, but the third release, "About You Now", reached number 47 on the Hot 100.[39] In December 2008, a cover of the holiday song "Christmas Wrapping" was released to promote the hour-long special Merry Christmas, Drake & Josh.[40] On February 3, 2009, Cosgrove released her first solo recording, the extended play About You Now with five songs.[41] To promote the 2009 animated film Cloudy with a Chance of Meatballs, Columbia Records released a single entitled "Raining Sunshine" with an accompanying music video in August 2009.[42][43] Cosgrove became one of MTV's Female Pop Rookies of 2009.[44]

On March 17, 2010, it was reported that Cosgrove signed a deal, reportedly in the "low- to mid-seven-figure range" to do 26 additional episodes of iCarly.[45] Also in 2010, Cosgrove voiced Margo in Universal Studios' 3-D computer animated feature Despicable Me, released in July 2010. In 2010, Cosgrove worked with songwriters The Matrix, Dr. Luke, Max Martin,[43] Leah Haywood, and Daniel James for her debut studio album. She said that "most of the songs are fun, pop, rock-girl empowerment".[43] The first single from her album, "Kissin U", was premiered on Ryan Seacrest's radio show on March 12, 2010.[46] The album, titled Sparks Fly, was released in April 2010,[47] and peaked at number 8 on the US Billboard 200 chart. In January 2011, Cosgrove revealed that her new EP would be titled High Maintenance,[10] and also released the first single from the same. The song, titled "Dancing Crazy", was written by Max Martin, Shellback, and Avril Lavigne, and produced by Martin and Shellback.[48] With three weeks of airplay, the song debuted at number 40 on the US Billboard Adult Pop Songs.[10] 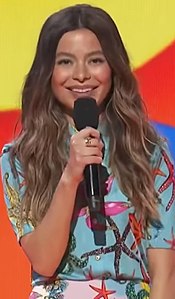 On January 24, 2011, she released her debut tour, Dancing Crazy Tour, visiting North America in support of her first studio album Sparks Fly. The tour began in Missouri, traveled throughout the United States, and ended in Ohio. Cosgrove continued the tour into the summer to promote her second EP, High Maintenance.[49] On July 15, 2011, the tour continued with a new title, Dancing Crazy Summer Tour, traveled the United States and Canada and performed at music festivals and state fairs. On August 11, 2011, Cosgrove broke her ankle in a tour bus accident on Interstate 70 near Vandalia, Illinois, resulting in the cancellation of her U.S. tour dates.[50][51] On May 17, 2012, it was announced that the show's sixth season would be the last for iCarly.[52] The series finale, "iGoodbye", aired on November 23, 2012.[53] On January 24, 2012, Cosgrove released her second iCarly's soundtrack, iCarly: iSoundtrack II, produced by Dr. Luke.[54] Following the filming of iCarly's finale in June 2012, Cosgrove embarked on a continuation of the Dancing Crazy Tour, titled the Summer Tour, in July and August 2012.

On February 15, 2013, it was announced that Cosgrove would star in Girlfriend in a Coma, a television series written by Liz Brixius for NBC and adapted from the novel of the same title by Douglas Coupland. Cosgrove was scheduled to play Evie, the daughter of Karen, who wakes up after a nearly 20-year-long coma and finds out she has a daughter;[55] On March 19, 2013, it was announced that Christina Ricci left the cast and the project had several problems.[56] The project was later cancelled.[57] Cosgrove again voiced Margo in Despicable Me 2, released on June 5.[58] In 2013, she appeared in the animated short films Training Wheels as Margo and Gru's Girls as Savana. In December, she announced on the Today Show that she was recording a new album.[59][60] In 2014, Cosgrove performed voice work in the animated film A Mouse Tale, which was released on February 10, 2015.[61] Cosgrove also starred in the horror film The Intruders with Austin Butler, portraying the role of Rose.[62]

In May 2015, Cosgrove was cast in the NBC comedy pilot Crowded, created by Suzanne Martin with executive producer Sean Hayes.[63][64] Cosgrove played Shea, an astrophysics PhD graduate from MIT, who does not know what to do in post-college life, and so decides with her sister to move back home to find out, driving her parents crazy.[65] The series debuted on March 15, 2016, but was cancelled after one season.[66] In March 2017, Cosgrove was cast in the NBC comedy pilot Spaced Out from creators Adam Sztykiel and Bill Lawrence.[67] However, it was not ordered to series.[68] In 2017, Cosgrove reprised her role as Margo once again in Despicable Me 3, which was released on June 14, 2017.[69] In 2019, Cosgrove was cast as Lisa Brown in the film 3022.[70] Since 2019, she has been the host of the CBS series Mission Unstoppable with Miranda Cosgrove,[71] which received two Daytime Emmy Award nominations in 2020.[72] In December 2020, it was announced that Cosgrove would reprise her role as Carly Shay in an iCarly revival.[73]

Cosgrove is an active supporter of St. Jude Children's Research Hospital in Memphis, Tennessee.[74] She also visits other children's hospitals and considers Education Through Music one of her favorite charities.[75] She is a national spokesperson for Light the Night Walk, an organization that creates awareness for blood cancer.[76] She signed with skin care and cosmetics company Neutrogena on February 12, 2010, as an ambassador.[77]

Main article: List of awards and nominations received by Miranda Cosgrove
Cosgrove has won two Young Artist Awards and one Kids' Choice Award, as well as receiving a number of nominations from both. She has won various awards in recognition for her public image. In the 2012 edition of the Guinness World Records, Cosgrove was listed as the highest paid child actress, for her work on iCarly.[81] In 2020, she received two Daytime Emmy Award nominations for her work on Mission Unstoppable with Miranda Cosgrove.

Retrieved from "https://en.famepedia.org/w/index.php?title=Miranda_Cosgrove&oldid=50933"
Categories:
Hidden categories:
Cookies help us deliver our services. By using our services, you agree to our use of cookies.