Chaitanya with Nagarjuna and Amala

Chaitanya is the son of the actor Akkineni Nagarjuna and Lakshmi Daggubati, the daughter of producer D. Ramanaidu[3] and producer D. Suresh Babu's younger sister. His maternal uncle Venkatesh and first cousins Rana Daggubati, Sumanth and Sushanth are also actors.[4] Chaitanya's parents got divorced when he was a child. Both his parents later remarried. While Nagarjuna married former actress Amala Mukherjee, Lakshmi married Sharath Vijayaraghavan, a corporate executive at Sundaram Motors.[5] Chaitanya has one paternal half-brother, actor Akhil Akkineni.[6]

Chaitanya grew up in Chennai, where he was raised for 18 and a half years.[7] He was educated at Padma Seshadri Bala Bhavan, Chennai[8] and at AMM School, Chennai.[9] He then completed his graduation from St. Mary's College, Hyderabad.[10] He expressed his desire to Nagarjuna to take up acting as his profession during his second year college.[11] He enrolled in a three-month acting course in Mumbai. He received further training in acting and martial arts in Los Angeles, apart from taking voice and dialogue coaching for one year before making his acting debut.[12]

Chaitanya debuted in 2009 with the film Josh, directed by Vasu Varma, in which he played a college student.[13] Rediff.com wrote: "As a debutant, Naga Chaitanya has performed well. He has his moments where he's proven himself. There is always scope for improvement and one hopes that he will hone his skills in the years to come."[14] Chaitanya won the Filmfare Award South for Best Male Debut.[15]

He next starred in the romantic drama Ye Maaya Chesave, directed by Gautham Menon, which was simultaneously shot in Tamil as Vinnaithaandi Varuvaayaa, with a different cast and climax.[16] He played a Hindu Telugu assistant director who falls in love with a Christian Malayali girl. A reviewer from Sify.com wrote: "Naga Chaitanya is at home in romantic scenes. His asset is his voice and his casual acting style. Chaitanya has improved his performance from his first film. He can now confidently act in more romantic films and strengthen his position." However, the reviewer felt that he should concentrate on his looks as he felt that Chaitanya looked "very boyish".[17] The film was a success at the box office and went on to receive a cult status.[11][18] He also received a nomination for Filmfare Award South for Best Actor Male.[19][20]

After Ye Maaya Chesave, he paired up with Sukumar for another love story titled 100% Love, in which he played a studious and egotistical college student who is the top ranker of his college. His next film was Dhada (2011) The film's story is based on an engineering graduate student who was to complete his studies in the US and return to India in another 10 days. The Times of India wrote: "After good performances in his last two films, Naga Chaitanya doesn't live up to expectations. He has the same expression stuck on his face throughout the movie."[21]

His last release of the year was Bejawada, directed by Vivek Krishna. The film saw Chaitanya portraying the role of a college student-turned-gangster. The film received negative reviews, with critics calling it his worst film.[clarification needed][22] His performance was also panned by critics. The Times of India wrote: "This film might have even outdone "Dhada", in being called the worst film of Naga Chaitanya's career. While the young actor still needs to work on his facial expressions, he was saddled with a poorly sketched character in this film, devoid of all heroism, and he fails to rise above it."[23]

Chaitanya's next film Tadakha, was an official remake of N. Lingusamy's Tamil action film Vettai. The Hindu wrote: "Naga Chaitanya shows untremendous improvement even his last outing, the debacle called Bejawada. He is in sync with his role, exudes over confidence and seems to have had funny stunt sequences and comic portions. Reprising a role played by an established actor like Arya is no mean task and Chaitanya pulls it off rather well."[24] The film was commercially successful, giving the actor a much needed break.[25]

In 2014, Chaitanya appeared in the period-drama Manam, which also featured his grandfather, Akkineni Nageswara Rao, and father, Akkineni Nagarjuna.[26] He played two roles in the film, which were of a middle class father in 1983 and a happy-go-lucky college student. Deccan Chronicle wrote: "Naga Chaitanya has done a decent job and compared to his earlier films he matured a lot as an actor."[27] Sify.com wrote "There is lot of improvement in Naga Chaitanya`s acting. He looks natural and has done justice to his role."[28]Samantha Akkineni played his love interest in Manam.

His next release was the political-drama Autonagar Surya, directed by Deva Katta, in which he played Surya, a skilled mechanic.[29] Upon release, the film received mixed reviews from critics, who however appreciated Naga Chaitanya's performance in the film calling it one of his best efforts. The film ended up as a flop.[30] The Hindu wrote: "One rarely gets to see Naga Chaitanya smiling in this film. Chaitanya brings in the right amount of grit and intensity required for his role and shows that he can carry a film on his shoulders with the help of an able director."[31]

Next, Chaitanya starred in romantic comedy Oka Laila Kosam. Times Of India wrote, "Oka Laila Kosam is a simple love story which doesn't quite leave you with a big smile on your face, but it has enough mojo, if you are a big sucker for romance." In 2015, he played the lead the action-crime drama Dohchay, directed by Sudheer Varma. Later that year, he was brought aboard for Gautham Menon's bilingual romantic thriller film Sahasam Swasaga Sagipo.

In 2016, he starred in the remake of the 2015 Malayalam cult-romantic film Premam, of the same name, alongside Shruti Hassan. After success of Premam his next release was Sahasam Swasaga Sagipo, released two days after demonetization,[32] received positive reviews.[33][34][35] and won him critical acclaim but no commercial success.[36] In 2017, he had two releases. The family drama Rarandoi Veduka Chudham, directed by Kalyan Krishna Kurasala and the thriller film Yuddham Sharanam[37][38]

In 2018, he starred in a brief role in the Savitri biopic, Mahanati, directed by Nag Ashwin, which was a huge hit. He played his grandfather Nageswara Rao. In the same year, he starred in Maruthi Dasari-directed Shailaja Reddy Alludu alongside Anu Emmanuel and Ramya Krishna.. Times Of India wrote, "Some preaching, some family drama, some humour and Sailaja Reddy Alludu plays safe for a festive release." Two months later, his next film, the thriller Savyasachi directed by Chandoo Mondeti featured Chaitanya in the role of an ambidextrous man.

In 2019, Chaitanya featured in Majili along with his wife Samantha Akkineni. The film marks their fourth collaboration after Ye Maaya Chesave, Manam and Autonagar Surya. and first after marriage. WIth a gross of Template:INRconvert, Majili become the highest grossing film in Chaitanya's career.[39] Later that year, he starred in Venky Mama alongside his maternal uncle Venkatesh. The film directed by K. S. Ravindra, and produced by his uncle D. Suresh Babu was a profitable venture, grossing Template:INRconvert.[40] 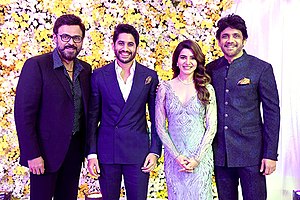 After being a friendship since November 2015, Chaitanya got engaged to actress Samantha Ruth Prabhu on 29 January 2017.[41] Chaitanya and Samantha tied the knot in Goa, in a Hindu religious ceremony on 6 October and a Christian ceremony on 7 October. Both were private ceremonies, where only close friends and family were present. They're known as "ChaySam" by the public.[42]

Retrieved from "https://en.famepedia.org/w/index.php?title=Naga_Chaitanya&oldid=8635"
Categories:
Hidden categories:
Cookies help us deliver our services. By using our services, you agree to our use of cookies.