Structure of the United Nations.

An organization or organisation is an entity, such as a company, an institution, or an association, comprising one or more people and having a particular purpose.

The word is derived from the Greek word organon, which means tool or instrument, musical instrument, and organ.

A hybrid organization is a body that operates in both the public sector and the private sector simultaneously, fulfilling public duties and developing commercial market activities.

A voluntary association is an organization consisting of volunteers. Such organizations may be able to operate without legal formalities, depending on jurisdiction, including informal clubs or coordinating bodies with a goal in mind which they may express in the form of an manifesto, mission statement, or in an informal manner reflected in what they do because remember every action done by an organization both legal and illegal reflects a goal in mind.[1][2]

But what makes an organization recognized by the government is either filling out Incorporation (business) or recognition in the form of either societal pressure (ex: Advocacy group), causing concerns (ex: Resistance movement) or being considered the spokesperson of a group of people subject to negotiation (ex: the Polisario Front being recognized as the sole representative of the Sahawri people and forming a partially recognized state.)

Compare the concept of social groups, which may include non-organizations.[4] 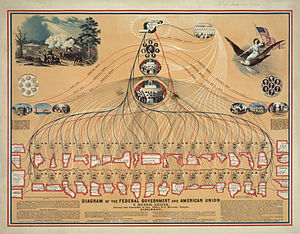 The study of organizations includes a focus on optimising organizational structure. According to management science, most human organizations fall roughly into four types:[citation needed]

These consist of a group of peers who decide as a group, perhaps by voting. The difference between a jury and a committee is that the members of the committee are usually assigned to perform or lead further actions after the group comes to a decision, whereas members of a jury come to a decision. In common law countries, legal juries render decisions of guilt, liability and quantify damages; juries are also used in athletic contests, book awards and similar activities. Sometimes a selection committee functions like a jury. In the Middle Ages, juries in continental Europe were used to determine the law according to consensus among local notables.

Committees are often the most reliable way to make decisions. Condorcet's jury theorem proved that if the average member votes better than a roll of dice, then adding more members increases the number of majorities that can come to a correct vote (however correctness is defined). The problem is that if the average member is subsequently worse than a roll of dice, the committee's decisions grow worse, not better; therefore, staffing is crucial.

Parliamentary procedure, such as Robert's Rules of Order, helps prevent committees from engaging in lengthy discussions without reaching decisions.

This organizational structure promotes internal competition. Inefficient components of the organization starve, while effective ones get more work. Everybody is paid for what they actually do, and so runs a tiny business that has to show a profit, or they are fired.

Companies who utilize this organization type reflect a rather one-sided view of what goes on in ecology. It is also the case that a natural ecosystem has a natural border - ecoregions do not, in general, compete with one another in any way, but are very autonomous.

The pharmaceutical company GlaxoSmithKline talks about functioning as this type of organization in this external article from The Guardian. By:Bastian Batac De Leon.

This organizational type assigns each worker two bosses in two different hierarchies. One hierarchy is "functional" and assures that each type of expert in the organization is well-trained, and measured by a boss who is super-expert in the same field. The other direction is "executive" and tries to get projects completed using the experts. Projects might be organized by products, regions, customer types, or some other schemes.

A hierarchy exemplifies an arrangement with a leader who leads other individual members of the organization. This arrangement is often associated with basis that there are enough imagine a real pyramid, if there are not enough stone blocks to hold up the higher ones, gravity would irrevocably bring down the monumental structure. So one can imagine that if the leader does not have the support of his subordinates, the entire structure will collapse. Hierarchies were satirized in The Peter Principle (1969), a book that introduced hierarchiology and the saying that "in a hierarchy every employee tends to rise to his level of incompetence."

Sociology can be defined as the science of the institutions of modernity; specific institutions serve a function, akin to the individual organs of a coherent body. In the social and political sciences in general, an "organization" may be more loosely understood as the planned, coordinated and purposeful action of human beings working through collective action to reach a common goal or construct a tangible product. This action is usually framed by formal membership and form (institutional rules). Sociology distinguishes the term organization into planned formal and unplanned informal (i.e. spontaneously formed) organizations. Sociology analyses organizations in the first line from an institutional perspective. In this sense, organization is an enduring arrangement of elements. These elements and their actions are determined by rules so that a certain task can be fulfilled through a system of coordinated division of labor.

By coordinated and planned cooperation of the elements, the organization is able to solve tasks that lie beyond the abilities of the single elements. The price paid by the elements is the limitation of the degrees of freedom of the elements. Advantages of organizations are enhancement (more of the same), addition (combination of different features) and extension. Disadvantages can be inertness (through co-ordination) and loss of interaction.

Among the theories that are or have been influential are:

A leader in a formal, hierarchical organization, is appointed to a managerial position and has the right to command and enforce obedience by virtue of the authority of his position. However, he must possess adequate personal attributes to match his authority, because authority is only potentially available to him. In the absence of sufficient personal competence, a manager may be confronted by an emergent leader who can challenge his role in the organization and reduce it to that of a figurehead. However, only authority of position has the backing of formal sanctions. It follows that whoever wields personal influence and power can legitimize this only by gaining a formal position in the hierarchy, with commensurate authority.[6]

An organization that is established as a means for achieving defined objectives has been referred to as a formal organization. Its design specifies how goals are subdivided and reflected in subdivisions of the organization. Divisions, departments, sections, positions, jobs, and tasks make up this work structure. Thus, the formal organization is expected to behave impersonally in regard to relationships with clients or with its members. According to Weber's definition, entry and subsequent advancement is by merit or seniority. Each employee receives a salary and enjoys a degree of tenure that safeguards him from the arbitrary influence of superiors or of powerful clients. The higher his position in the hierarchy, the greater his presumed expertise in adjudicating problems that may arise in the course of the work carried out at lower levels of the organization. It is this bureaucratic structure that forms the basis for the appointment of heads or chiefs of administrative subdivisions in the organization and endows them with the authority attached to their position.[7]

In prehistoric times, man was preoccupied with his personal security, maintenance, protection, and survival. Now man spends a major portion of his waking hours working for organizations. His need to identify with a community that provides security, protection, maintenance, and a feeling of belonging continues unchanged from prehistoric times. This need is met by the informal organization and its emergent, or unofficial, leaders.[6]

Leaders emerge from within the structure of the informal organization. Their personal qualities, the demands of the situation, or a combination of these and other factors attract followers who accept their leadership within one or several overlay structures. Instead of the authority of position held by an appointed head or chief, the emergent leader wields influence or power. Influence is the ability of a person to gain cooperation from others by means of persuasion or control over rewards. Power is a stronger form of influence because it reflects a person's ability to enforce action through the control of a means of punishment.[6]

Retrieved from "https://en.famepedia.org/w/index.php?title=Organization&oldid=4163"
Categories:
Hidden categories:
Cookies help us deliver our services. By using our services, you agree to our use of cookies.