Jump to content
From FAMEPedia, The free encyclopedia
Unchecked
Indian actor and politician

Paresh Rawal (born 30 May 1955) is an Indian film actor, comedian[4] and politician known for his works notably in Bollywood. He was a member of parliament in the Lok Sabha of the Indian Parliament representing the Ahmedabad East constituency from 2014 to 2019. He is politically affiliated with the Bharatiya Janata Party. Rawal speaks Hindi, Gujarati, Marathi, Telugu and English. In 1994, he won the National Film Award for Best Supporting Actor for his performances in the films Woh Chokri and Sir.[5] For the latter, he received his first Filmfare Award for Best Performance in a Negative Role. This was followed by Ketan Mehta's Sardar, which saw him playing the lead role of freedom fighter Vallabhbhai Patel, a role that got him national and international acclaim.[5]

Rawal was born and brought up in Mumbai.[2] He is married to Swaroop Sampat, an actress and winner of the Miss India contest in 1979. Paresh and Swaroop have two sons, Aditya and Anirudh. He is an alumnus of Narsee Monjee College of Commerce & Economics, Vile Parle, Mumbai.[6]

Paresh Rawal and Swaroop Sampat at the screening of the film Oye Lucky! Lucky Oye!

Rawal made his debut with the 1985 film Arjun in a supporting role. It was the 1986 blockbuster Naam that established him as an actor with great talent. He then appeared in over 100 films throughout the 1980s and 1990s, mostly as the main villain, such as in Roop ki Rani Choron Ka Raja, Kabzaa, King Uncle, Ram Lakhan, Daud, Baazi and so many more. In the 1990s, he also starred in the cult comedy Andaz Apna Apna in which he played a double role. Paresh Rawal was perceived as a character actor by both audiences and critics until the 2000 Bollywood cult classic Hera Pheri, after which he starred in many Hindi mainstream films as a lead actor or main protagonist. Rawal played the dim-witted, boisterous and kind-hearted Marathi landlord Baburao Ganpatrao Apte in the film Hera Pheri, who takes in Raju (Akshay Kumar) and Shyam (Sunil Shetty) as paying guests in his house. Rawal's acting was a key reason for the major nationwide success the film received.[7] For his performance, he won the Filmfare Best Comedian Award. He reprised his role as Baburao in the sequel to the film Phir Hera Pheri (2006), which was also successful.[5] 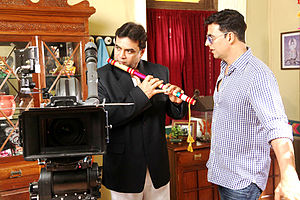 On the set of OMG with actor Akshay Kumar

In 2012, Paresh Rawal played the lead role in the superhit OMG – Oh My God!. Good friend Akshay Kumar was seen supporting him, and both won rave reviews for their roles. He has also had a very successful acting career in Gujarati plays, the latest hit being Dear Father. For television he has produced several Hindi soaps including Zee TV's Teen Bahuraaniyaan, Sahara One's Main Aisi Kyunn Hoon and Colors' Laagi Tujhse Lagan.[9]

One of his upcoming projects is a biopic of Narendra Modi. Paresh Rawal is going to produce the film, which will be his second production venture after Oh My God.[10]

His latest notable release is Rajkumar Hirani's Sanju with Ranbir Kapoor. He plays actor Sunil Dutt's role in the movie. He is also reprising his role as Baburao Ganpatrao Apte in Hera Pheri 3 which will release in 2019.[11]

His upcoming movies are Coolie No. 1, Hungama 2, Toofan and Aankh Micholi and Hera Pheri 3.

On 10 September 2020 he was appointed as the chief of the National School of Drama, by the President of India[12]

He won as the Bharatiya Janata Party's Member of Parliament (MP) from Ahmedabad East constituency in the 2014 Indian general election. In 2014, he was awarded Padma Shri.[13][14]

On 21 May 2017, Paresh Rawal tweeted: "Instead of tying stone pelter on the army jeep, tie Arundhati Roy"[17] making a reference to the allegations that Indian soldiers tied a stone-pelter in Kashmir to their jeep and used him as a human shield, and it was presumed that he wanted Roy to be used as a human shield.[18] Rawal's tweet provoked a controversy, and he was accused of advocating violence against women. He was criticised by fellow actor Swara Bhaskar.[19] Rawal was also criticised by Congress leader Shobha Ojha[20] while filmmaker Ashoke Pandit supported his tweet.[19]

He addressed the tweet controversy in July 2017 by saying with regard to Roy that he was exercising his freedom of expression – "If she is right, then even I am right. If she regrets making the comments, then I also regret. Agreed that this is fake news, but what about the comments that she made on 2002 Godhra riots? If you have freedom of expression then even I have it"[21] 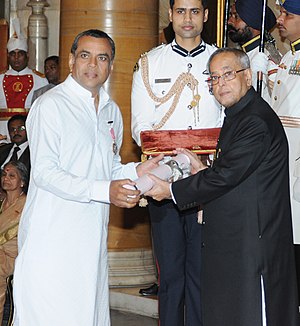 The President, Pranab Mukherjee presenting the Padma Shri Award to Paresh Rawal, at an Investiture Ceremony-II, at Rashtrapati Bhavan, in New Delhi on 26 April 2014

He acted in a few Doordarshan serials during 1984 and 1988. His first serial was with Reeta Bhaduri called Bante Bighadte in the year 1984/85 and Chunauti, a serial based on college campus.

Retrieved from "https://en.famepedia.org/w/index.php?title=Paresh_Rawal&oldid=6980"
Categories:
Hidden categories:
Cookies help us deliver our services. By using our services, you agree to our use of cookies.