Riteish Vilasrao Deshmukh (born 17 December 1978)[1][2] is an Indian film actor, architect, producer and entrepreneur. He is known for his work in Hindi and Marathi cinema. He is the son of former Chief Minister of Maharashtra late Vilasrao Deshmukh and Vaishali Deshmukh.[4][5]

Apart from Hindi films, Deshmukh has made his debut as a film producer with the Marathi success Balak Palak (2013). The following year, he made his acting debut in Marathi cinema with the action film Lai Bhaari (2014).[6]

Riteish made his Hindi film debut with the 2003 romance, Tujhe Meri Kasam opposite Genelia D'Souza.[7] He later appeared in Out of Control.[8] In his third film, Masti, a comic thriller, his role was widely disparaged. Regardless, the film performed well at the box office. He gained fame after his performance in Masti, which earned him two minor awards. He subsequently appeared Bardaasht and Naach, both of them being box-office duds.[8] His first relatively successful lead role occurred in the widely panned sex-comedy Kyaa Kool Hai Hum with Tusshar Kapoor. While the film was reviled by critics, it was appreciated by audiences and declared a moderate success at the box office. Ritesh, by now had earned a strong foothold in the Bollywood film industry via his comic roles.

He appeared in Malamaal Weekly and Apna Sapna Money Money apart from Bluffmaster! with Abhishek Bachchan in the lead.[9] He was seen in guest roles in Ram Gopal Varma's Darna Zaroori Hai,[10] and then Namastey London, which was a box office hit. In 2007, Cash followed.[9] Later that year, he appeared in Sajid Khan's directorial debut Heyy Babyy, co-starring Akshay Kumar and Fardeen Khan, which was a huge hit.[11] He appeared in the comedy Dhamaal which was a semi hit.

In 2008, he played a lead role in De Taali, in which his performance was praised, and later in Chamku, both of which performed poorly at the box office.[10]

In 2009, his first release was Aladin, co-starring Amitabh Bachchan, Sanjay Dutt and Jacqueline Fernandez. He was in the multi-starcast, Aladin. He then played a supporting role in Ram Gopal Varma's Rann, again co-starring Amitabh Bachchan, Paresh Rawal and Rajpal Yadav. His final film of 2009 was Do Knot Disturb with Govinda, Sushmita Sen, Sohail Khan and Lara Dutta.

In 2010, he worked with Sajid Khan on the comedy Housefull with Akshay Kumar, Deepika Padukone, Lara Dutta, Arjun Rampal and Jiah Khan. The film received negative response from critics, though it performed well commercially. His first release of 2011 was F.A.L.T.U., in which he played the role of Bajirao, a fake college principal. His second release of the year was the comic sequel Double Dhamaal. Both were above-average grossers[12] and very successful.[citation needed]

In 2012, he first appeared in Tere Naal Love Ho Gaya in which he is paired opposite his real wife Genelia D'Souza. It proved a commercial hit despite being a shoestring budget. He then starred in a sequel, Housefull 2, which released on 6 April 2012 and was a huge success like its predecessor. Housefull 2 has been marked as Ritesh's biggest success to date. His last release of the year and his latest film was sequel Kyaa Super Kool Hain Hum, which released on 27 July 2012.

Deshmukh then starred in another sequel, this time to the 2004 hit Masti titled Grand Masti which released in September 2013 and became a box office success, despite receiving negative reviews. Deshmukh made his debut as a film producer with the Marathi film Balak Palak, directed by Ravi Jadhav. It released on 4 January 2013 and was a success. Deshmukh has decided to make a Hindi remake of the film.

In 2014, Deshmukh appeared in 2 completely different roles; first in the romance-comedy film Humshakals, which was a box office failure and then in the romance-thriller Ek Villain. With Ek Villain, Riteish made his debut as an antagonist (villain), acting a part like this for the first time. Ek Villain was a box office success. Besides this, he also made his acting debut in Marathi cinema the same year with the action film Lai Bhaari.

In 2015, he appeared in Bangistan along with Pulkit Samrat. The film was a comedy-satire and received a mixed critical response. However, was a box office disaster.

In 2016, he appeared in the third installment of the Housefull and Masti series Housefull 3 and Great Grand Masti and a musical drama Banjo. He appeared in the comedy film Bank Chor which was released in 2017 and is scheduled to appear in action film Mauli.[13] 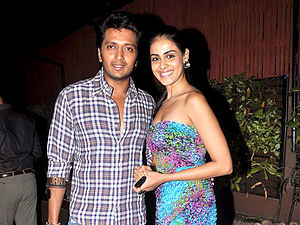 Deshmukh is a son of the ex-chief minister of Maharashtra and Union Minister of Heavy Industries & Public Enterprises India - Vilasrao Deshmukh, and Vaishali. He has an elder brother named Amit and a younger brother named Dheeraj, both of them politicians. Deshmukh studied at G D Somani Memorial School and earned an architectural degree from Kamla Raheja College of Architecture, Mumbai. He practiced for a year with an overseas architectural firm. He continued designing since his return to India. Deshmukh maintains an ownership in Evolutions, an India-based architectural and interior designing firm.

Deshmukh launched his own production house Mumbai Film Company in 2013 with producing a Marathi film Balak Palak, which won several awards. In 2013, he also launched his cricket team Veer Marathi in Celebrity Cricket League which he owned as well as mentored as the team captain co-owned by brother Dheeraj Deshmukh, while the brand ambassador is wife Genelia D'souza.

Deshmukh has also been recognized as a producer and singer.

Retrieved from "https://en.famepedia.org/w/index.php?title=Riteish_Deshmukh&oldid=8827"
Categories:
Hidden categories:
Cookies help us deliver our services. By using our services, you agree to our use of cookies.