Jump to content
From FAMEPedia, The free encyclopedia
Unchecked
American actress and director

Robin Gayle Wright[1] (born April 8, 1966) is an American actress and director. She is the recipient of eight Primetime Emmy Award nominations and has earned a Golden Globe Award and a Satellite Award for her work in television.

Wright first gained attention for her role in the NBC Daytime soap opera Santa Barbara, as Kelly Capwell from 1984 to 1988. She then made the transition to film, starring in the romantic comedy fantasy adventure film The Princess Bride (1987). This role led Wright to further success in the film industry, with starring roles in films such as Forrest Gump (1994), the romantic drama Message in a Bottle (1999), the superhero drama-thriller Unbreakable (2000), the historical drama The Conspirator (2010), the biographical sports drama Moneyball (2011), the mystery thriller The Girl with the Dragon Tattoo (2011), the biographical drama Everest (2015), the superhero film Wonder Woman (2017), and the neo-noir science fiction film Blade Runner 2049 (2017).

Wright starred as Claire Underwood in the Netflix political drama web television series House of Cards, for which she won the Golden Globe Award for Best Actress – Television Series Drama in 2013, making her the first actress to win a Golden Globe for a web television series. Wright has also received six Primetime Emmy Award nominations in the Outstanding Lead Actress category for House of Cards (one for each season), and two nominations in the Outstanding Drama Series category in 2016 and 2017 as a producer on the show.

Wright is also one of the highest paid actresses in the United States, earning US$420,000 per episode for her role in House of Cards in 2016.[2]

Wright began her career as a model, when she was 14.[5][6] At the age of 18, she played Kelly Capwell in the NBC Daytime soap opera Santa Barbara, for which she received several Daytime Emmy Award nominations.[7]

She transitioned into feature film work with a role in Hollywood Vice Squad in 1986, followed by her breakthrough role as Princess Buttercup in the cult film The Princess Bride in 1987. She gained critical acclaim in her role as Jenny Curran in Forrest Gump (1994), receiving Golden Globe Award and Screen Actors Guild nominations for Best Supporting Actress.

In 1996 she starred in the lead role of the film adaptation of Daniel Defoe's Moll Flanders (1996), for which she received a Satellite Award Nomination for Best Actress in a Drama. She was nominated for a Screen Actors Guild Award for Best Actress for her role in She's So Lovely (1997), a film in which she co-starred with her then-husband Sean Penn. Wright received her third Screen Actors Guild Award nomination for her role in the television film Empire Falls (2005). 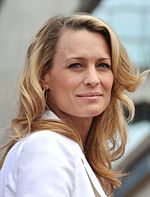 Since 2013, Wright has appeared in the Netflix political drama web television series House of Cards in the role of Claire Underwood, the ruthless wife of political mastermind Frank Underwood. On January 12, 2014, she won a Golden Globe for the role, becoming the first actress to win the award for an online-only web television series;[8] she was nominated for the same award the following year. She also received nominations for the Primetime Emmy Award in 2013 and 2014 for the same role. Following Season 4 in 2016, Wright stated that she felt Claire Underwood was the equal of Frank Underwood and demanded equal pay for her performance as her co-star Kevin Spacey; Netflix acquiesced.[9] In 2017, for her performance in the fifth season, Wright was nominated for her fifth consecutive Primetime Emmy nomination for Outstanding Lead Actress in a Drama Series. For the years 2014, 2016, and 2017, Wright received Best Actress in a Drama Series nominations for the Critics' Choice Television Awards, with her being the only nomination for the show in December 2017.

In October 2017, Wright was set as the show's new lead, following sexual misconduct allegations against Spacey, which resulted in him being fired from the sixth and final season. For her last appearance as Underwood, her performance was acclaimed - described as a "commanding performance [that] is more than enough to keep [the final season] standing strong" [10] - earning her her final nominations for the role at the Screen Actors Guild and Primetime Emmy Awards in 2019. For the latter, she became one of seven women to be nominated for the category six or more times for the same show (the first in 10 years since Mariska Hargitay for Law & Order: Special Victims Unit ).[11]

In April 2019, it was announced that Wright would make her feature film directorial debut in the film Land.[12] Wright would also be starring as its lead, Edee Mathis, a lawyer who retreats in grief to the Shoshone National Forest in Wyoming. Sales for the film would start at Cannes the following month.[12] Filming began by October that year and the film was picked up by distributor Focus Features.[13] 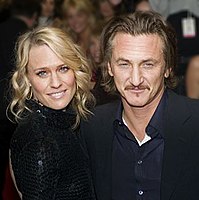 In 1989, Wright became involved with actor Sean Penn following his divorce from Madonna. Wright was offered the role of Maid Marian in the film Robin Hood: Prince of Thieves, but turned it down because she was pregnant.[15] Their daughter, Dylan Frances, was born in April 1991.[16] She backed out of the role of Abby McDeere in The Firm (1993) due to her pregnancy with her second child,[4] and their son, Hopper Jack, was born in August 1993.[17]

After breaking up and getting back together,[18] Wright and Penn married in 1996. Their on-and-off relationship seemingly ended in divorce plans, announced in December 2007,[19] but the divorce petition was withdrawn four months later at the couple's request.[20] In February 2009, Wright and Penn attended the 81st Academy Awards together, at which Penn won Best Actor. Penn filed for legal separation in April 2009,[21] but withdrew the petition in May.[22] On August 12, 2009, Wright filed for divorce, declaring she had no plans to reconcile.[23][24][25] The divorce was finalized on July 22, 2010.[26]

Wright is the Honorary Spokesperson for the Dallas, Texas-based non-profit The Gordie Foundation.[33]

In 2014, Wright co-partnered with two California-based companies; Pour Les Femmes[34] and The SunnyLion.[35] The SunnyLion donates a portion of its profits to the Raise Hope For Congo movement.

Wright is an activist for human rights in the Democratic Republic of the Congo. She is the narrator and executive producer of the documentary When Elephants Fight[36] which highlights how multinational mining corporations and politicians in the Democratic Republic of Congo threaten human rights, and perpetuate conflict in the region.[37] Wright is a supporter of Stand With Congo, the human rights campaign behind the film.[38] In 2016, she spoke publicly in support of the campaign at a film screening at the TriBeCa Film Institute in New York City,[39] in media interviews,[40][41][42][43] with journalists,[44][45][46] and across her social media accounts.[47][48][49]

Retrieved from "https://en.famepedia.org/w/index.php?title=Robin_Wright&oldid=7072"
Categories:
Hidden categories:
Cookies help us deliver our services. By using our services, you agree to our use of cookies.