Sanjay Balraj Dutt (born 29 July 1959)[2][3] is an Indian actor who works in Hindi films. He is the recipient of several awards, including two Filmfare Awards and three Screen Awards. Dutt acted in 187 films, ranging from romance to comedy genres, but is usually typecast in action genres, and established himself as one of the most popular Hindi film actors of the later 1980s, 1990s, 2000s, and 2010s. 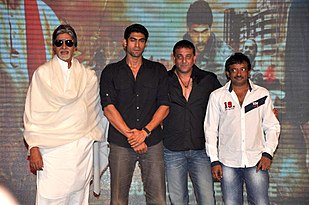 The son of actors Sunil Dutt and Nargis, Dutt made his acting debut in Rocky (1981), which was directed by his father. The crime thriller Naam (1985) proved to be a turning point in his career, which was followed by a series of commercially successful films in that decade, including Jeete Hain Shaan Se (1988), Mardon Wali Baat (1988), Ilaaka (1989), Hum Bhi Insaan Hain (1989) and Kanoon Apna Apna (1989). He earned nominations for the Filmfare Award for Best Actor for Saajan (1991) and Khalnayak (1993). Dutt earned his first Best Actor at the ceremony for playing a common man-turned-gangster in Vaastav: The Reality (1999). Along with Vaastav: The Reality, he also won accolades for playing an army officer in Mission Kashmir (2001), a soft-hearted goofy gangster in Munna Bhai M.B.B.S. (2003) and its sequel Lage Raho Munna Bhai (2006).

Dutt was arrested under the TADA and the Arms Act in April 1993 and was convicted for violation of Arms Act for possession of illegal weapons procured from other accused in the 1993 Bombay bombings. After serving his sentence, he was released in 2016.[4][5][6] Dutt's life receives considerable media coverage in India, and in 2018, Sanju, a biopic based on his life (which also saw a special appearance by him), was released to positive reviews and emerged as one of the highest-grossers of Indian cinema.

Sanjay Balraj Dutt was born in a Punjabi family at Mumbai. His parents were noted cinema actors Sunil Dutt (born Balraj Dutt) and Nargis (born Fatima Rashid). He has two sisters, Priya Dutt and Namrata Dutt.[7][8] His mother died in 1981, shortly before his debut film's premiere; her death is cited as the instigator of his drug abuse.[9] As a child actor, Dutt appeared briefly as a qawali singer in the 1972 film Reshma Aur Shera, which starred his father.[10]

Dutt made his Bollywood movie debut with the box-office super hit Rocky in 1981. Dutt then went on to star in Vidhaata, the highest-grossing Hindi film of 1982, along with film veterans Dilip Kumar, Shammi Kapoor and Sanjeev Kumar. He also starred in movies like Main Awara Hoon (1983). In 1985 he shot Jaan Ki Baazi, his first film in two years.[11]

His performances in both Kabzaa (1988) and J. P. Dutta's 1989 Hathyar were both well received by critics although both films only managed average collections at the box office.[14][15][16] In the late 1980s he was seen in a number of multi-starrers alongside leading actors like Govinda, Mithun, Dharmendra, Jackie Shroff and Sunny Deol.[11]

His successes continued in the 1990s, with films that include Tejaa, Khatarnaak, Zahreelay, Thanedaar, Khoon Ka Karz, Yalgaar, Gumrah, Sahibaan and Aatish: Feel the Fire. He went on to star in some of the most era-defining Indian films of the early 1990s such as Sadak, Saajan (for which he was nominated for the Filmfare Best Actor Award) and Khalnayak, for which he earned his second Filmfare Best Actor Award nomination.[11]

The Hindu wrote that "Sanjay's earlier films (like Naam and Sadak) got him a lot of favourable attention." and "Saajan established Sanjay Dutt as the conventional soft hero."[13]Saajan was the highest-grossing Bollywood film of 1991, and Sadak was the fifth highest grosser of 1991.[17] Khalnayak became a blockbuster and was the second-highest grosser of 1993.[18] This was followed by another box office success Gumrah, this was Dutt's second consecutive hit of the year.[19]

Dutt's first film after his 1993 arrest was Daud (1997). It did average business at the box office despite of getting a lot of publicity.[20] This was followed by Dushman which did well financially.[21] 1999 was an excellent year for Dutt and one that is regarded as his comeback, with all of his five releases being amongst the highest-grossing films of that year. He began it by starring in the Mahesh Bhatt-directed hit film Kartoos, followed by Khoobsurat, Haseena Maan Jaayegi, Daag: The Fire and Vaastav: The Reality, for which he won many awards, including his first Filmfare Best Actor Award.[22][23] His role in 2000's Mission Kashmir won him critical acclaim and a number of awards and nominations.[11] Dutt was also invited by the President of India to Rashtrapati Bhavan for his performance in the movie.[24]

The sequel of Munna Bhai M.B.B.S., Lage Raho Munna Bhai was released in late 2006. Dutt received a number of awards for his performance in the film, along with an award from the Prime Minister Manmohan Singh for his work in the Munna bhai series.[27] NDTV India counted the character Munna Bhai as one of top 20 fictional characters in Bollywood.[28] Later Dutt starred in movies like Dhamaal (2007), Shootout at Lokhandwala (2007), All the Best (2009), Double Dhamaal (2011), Son of Sardaar (2012) Agneepath (2012) and PK.[29]

In January 2008, the Indian film Institute Filmfare listed 12 films featuring Dutt in its list of top 100 highest-grossing movies of all time. In its May 2013 edition "100 years of Indian cinema" Filmfare listed three films featuring Dutt in its top 20 list of highest-grossing Hindi films of all time, adjusted for inflation these films were Lage Raho Munna Bhai, Khalnayak and Saajan.[30]

Vidhu Vinod Chopra on 29 September 2016 announced that the third part of Munna Bhai series, starring Dutt in the title role, would begin soon.[31] In 2017, Dutt appeared as the lead in Bhoomi, directed by Omung Kumar.[32] In 2018, he starred in Saheb, Biwi Aur Gangster 3.[33][34] In 2018, it was also announced that Dutt would feature alongside Ranbir Kapoor and Vaani Kapoor in Shamshera, which will release on 31 July 2020.[35] On 29 June 2018, his biopic Sanju released in which he made a special appearance.[36] Dutt and Alia Bhatt are currently shooting for Sadak 2.[37] In 2019, he joined the cast of historical film Bhuj: The Pride of India, which will feature an ensemble cast consisting of Ajay Devgn, Sonakshi Sinha and Parineeti Chopra.[38] He was seen in the film Prassthanam on 20 September 2019.[39] Dutt is currently working as the main antagonist on K.G.F: Chapter 2, the sequel to the blockbuster Kannada film, K.G.F: Chapter 1, marking his debut in Kannada cinema. 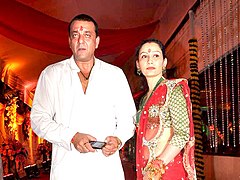 Dutt with wife Manyata in 2011

In the early 1980s, Dutt had a relationship with his co-star from his first film, Tina Munim.[43] After this relationship ended, Dutt married actress Richa Sharma in 1987.[44] She died of a brain tumour in 1996. The couple have a daughter, Trishala Dutt, born in 1988, who lives in the United States with her maternal grandparents.[45]

He is a devout Shaiva Hindu who has read holy scriptures and theological works.[50]

Bombay (now Mumbai) suffered a series of serial bombings in 1993. Dutt was among several people associated with Bollywood who were accused of involvement. It was alleged that Dutt accepted a delivery of weapons at his house from Abu Salem and co-accused Riyaz Siddiqui, who had also been implicated in relation to the Mumbai blasts.[51] It was claimed that the weapons formed a part of a large consignment of arms connected to the terrorists.[52] Dutt, however, in his confession stated that he took only one Type-56 from the producers of his movie Sanam, for his own family protection.[53] It has also been reported that Sanjay Dutt's father Sunil Dutt's political rivalry caused Sanjay Dutt's conviction.[54]

In April 1993, he was arrested under the provisions of the Terrorist and Disruptive Activities (Prevention) Act (TADA).[52][55][56] Dutt was granted bail by the Supreme Court of India on 5 May 1993; however, on 4 July 1994 his bail was cancelled and he was re-arrested. On 16 October 1995 he was granted bail.[57] Abdul Qayyum Abdul Karim Shaikh, who was thought to be a close aide of the terrorists' ringleader, Dawood Ibrahim, was arrested.[58] Dutt had given Qayuum's name to the police when confessing to arms possession, saying that in September 1992 he had bought a pistol from Qayuum in Dubai.[59] His arrest coincided with the release of his film, Khalnayak, in which he played a wanted criminal. The film's major success was in part due to Dutt's off-screen legal controversy.

On 31 July 2007, Dutt was cleared of the charges relating to the Mumbai blast; however, the TADA court sentenced Dutt to six years' rigorous imprisonment under Arms act for illegal possession of weapons.[52][60] According to The Guardian, "The actor claimed he feared for his life after the notorious 'Black Friday' bombings, which were allegedly staged by Mumbai's Muslim-dominated mafia in retaliation for deadly Hindu-Muslim clashes a few months earlier. But the judge rejected this defence and also refused bail."[60] Dutt was returned to jail at Arthur Road and soon after moved to the Yerawada Central Jail in Pune.[52][61] Dutt appealed against the sentence[62] and was granted interim bail on 20 August 2007 until such time as the TADA court provided him with a copy of its judgement.[63] On 22 October 2007 Dutt was back in jail but again applied for bail. On 27 November 2007, Dutt was granted bail by the Supreme Court.[64] On 21 March 2013 the Supreme Court upheld the verdict but shortened the sentence to five years' imprisonment. Dutt was given a month to surrender before the authorities.[65]

Dutt has said that "I am not a politician but I belong to a political family."[66] He was persuaded by a close friend to contest the 2009 Lok Sabha elections as a candidate for the Samajwadi Party, but withdrew when the court refused to suspend his conviction.[67] He was then appointed General Secretary of the Samajwadi Party, leaving that post in December 2010.[68] In March 2013 the Supreme Court upheld Dutt's five-year sentence, 18 months of which he already spent in jail during the trial.[69] He was given four weeks to surrender to the authorities, the court having refused to release him on probation due to the severity of the offence.[70]

On 10 May, the Supreme Court rejected Dutt's review petition for the reconsideration of his conviction and asked him to surrender on the stipulated date.[71][72] on 14 May, Dutt withdrew the mercy plea and surrendered to the Mumbai Police on 16 May 2013.[73][74] Just before the surrender, the Mumbai jail authority got an anonymous letter threatening Dutt's life. Dutt filed an appeal to allow him to surrender before entering Yerwada Central Jail. Later, Dutt withdrew this request too.[75] He was paroled from 21 December 2013. The parole was extended three times until March 2014, raising concern in Bombay High Court and a proposal from the Government of Maharashtra to amend the law of parole. He returned to Yerwada Central Jail after his parole ended.[76] Dutt was out on a two weeks' furlough granted by the Yerwada Central Jail authorities on 24 December.[77] He was subsequently incarcerated in Yerwada Central Jail, to complete his jail term.[78] He was released from there on 25 February 2016 after serving his sentence.[79]

Dutt was diagnosed with stage 3 lung cancer in August 2020. He is currently undergoing treatment in Mumbai. [80]He is now recovered from lung cancer.

Retrieved from "https://en.famepedia.org/w/index.php?title=Sanjay_Dutt&oldid=46328"
Categories:
Hidden categories:
Cookies help us deliver our services. By using our services, you agree to our use of cookies.