"Watching the River Flow" is a blues rock song by American singer Bob Dylan. Produced by Leon Russell, it was written and recorded during a session in March 1971 at the Blue Rock Studio in New York City. The collaboration with Russell formed in part through Dylan's desire for a new sound—after a period of immersion in country rock music—and for a change from his previous producer. The song was praised by critics for its energy and distinctive vocals, guitar, and piano. It has been interpreted as Dylan's account of his writer's block in the early 1970s, and his wish to deliver less politically engaged material and find a new balance between public and private life.

A minor hit in some countries worldwide, the song was included on the 1971 Bob Dylan's Greatest Hits Vol. II, and other Dylan compilation albums. In 2011, five current and former Rolling Stones appeared on a recording of "Watching the River Flow" as part of a tribute project for pianist Ian Stewart. The song has been covered by the Earl Scruggs Revue, Steve Gibbons, Colin James, Russell, and many others. 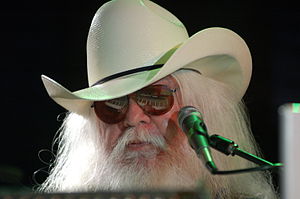 Leon Russell (pictured in 2009) was the producer of "Watching the River Flow".[1]

Between 1967 and 1970, Bob Dylan recorded and released a series of albums that incorporated country rock elements.[2][3][4][5] All were produced by Bob Johnston.[6][7] During the sessions for the final of these, New Morning, Dylan decided that he did not want to continue working with Johnston.[a] Al Kooper did uncredited production work to help Dylan finish the album.[9][10] For his next recording session, Dylan asked Leon Russell, who made his name with Joe Cocker,[11] to assist in finding a new sound.[12]

The recording session took place at Blue Rock Studio in New York City on March 16–19, 1971.[13] Russell assembled a backing group that included Carl Radle on bass, Jesse Ed Davis on guitar, and Jim Keltner on drums.[11][13] Eddie Korvin was the engineer.[14] On the first day in the studio, Dylan, on acoustic guitar and vocals, led the band through a rehearsal jam that included covers of "Spanish Harlem", "That Lucky Old Sun", "I'm A Ladies Man" (Hank Snow), "Blood Red River" (Josh White), and "I'm Alabama Bound" (Lead Belly version).[15][16][17] On the second day, after a brief rehearsal, "Watching the River Flow" was recorded with Dylan singing live with the band. "When I Paint My Masterpiece" was recorded in similar fashion on the third day, and a mixing of both songs took place on the last day.[14]

"Watching the River Flow" was based on studio jams done at Blue Rock,[16] and uses a chord progression in the key of F major.[18][19] Russell recalled that when developing the song, the basic track was formed, and that Dylan then wrote the lyrics in several minutes.[11] Jim Keltner has also reported that Dylan wrote the songs at the Blue Rock session quickly: "I remember Bob ... had a pencil and a notepad, and he was writing a lot. He was writing these songs on the spot in the studio, or finishing them up at least."[16]

The music of "Watching the River Flow"—whose feel the journalist Bob Spitz has likened to Dylan's "Leopard-Skin Pill-Box Hat" (1966)[21]—has been described by different critics as a "[b]lues-powered sound [that cascades] like clumps of flotsam and jetsam",[22] as "featur[ing] some blistering guitar work ... and rollicking piano work from Russell",[20] and as "an energetic, funky-gospel rocker".[23] The recording has been praised for the dynamic way in which Dylan's vocal mannerisms bounce off Russell's characteristic stride piano playing.[21] Biographer Clinton Heylin has pointed out that Dylan borrowed the line "If I had wings and I could fly" from the song "The Water is Wide" and words from "Old Man River" for his composition.[16]

Four and a half months after the recording session, on August 1, Russell backed Dylan on bass at the Concert for Bangladesh, organized by George Harrison.[24] In November 1971, Russell accompanied Dylan into a studio again to record Dylan's next single, "George Jackson". At this session, Russell once more played bass.[25][26] Joe Schick, the manager of Blue Rock in 1971, has commented that although Dylan and Russell had a reasonably friendly relationship, their rapport was not strong enough to record an album together.[21] Indeed, Heylin noted in 2009 that Russell had not recorded with Dylan again;[16] however, they did tour together in 2011.[27] Russell died in 2016.[28]

The song was released as a single on June 3, 1971.[13] In the US, Columbia Records' promotion included a full-page Billboard advertisement, declaring the track as "A unique new single by Bob Dylan." The advertisement contained a photograph of Dylan holding a camera to his eye.[36]

Biographer Robert Shelton wrote that in the early 1970s, Dylan was frequently criticized for "selling out" and that people were pressuring him to go back to his earlier trend of composing protest songs.[23][d] For Shelton, who noted the promotional photo for "Watching the River Flow" depicting Dylan looking through a camera, the track expressed Dylan's wish just to be an observer, and not a political activist.[23] Author Seth Rogovoy similarly interpreted the song as Dylan's desire to ignore politics and avoid getting involved in people's disputes.[52] The line "[This ol' river] keeps on rollin', though/No matter ... which way the wind does blow" has been heard by writers Peter Vernezze and Carl J. Porter as evidence of Dylan's conviction that "the river of time, the flow of facts, in reality remains unaffected by winds of beliefs, the flow of changing opinions."[53]

Greil Marcus highlighted the importance of disregarding one's initial reading of the song. "The first impression is that Bob Dylan is setting up the usual private scene: 'I'll sit here and watch the river flow.' Well, that's certainly a boring idea."[54] He went on to describe how Dylan explores the difficulty of retaining privacy while making public art; the singer is coming to terms with unwanted attention inherent in stardom, without giving up his connection to his fans.[54] Marcus argued that the reason the single was not a hit in the US was because "the time has passed when people are interested in hearing Bob Dylan say he'll just sit there and watch the river flow ... even though that's not quite what he's saying". For Marcus, "Watching the River Flow" is a compelling work, but the subtlety of the song may have prevented it from reaching a wide audience.[54]

Clinton Heylin and writer Christopher Ricks discussed Dylan's restlessness in the song. Heylin said that in "Ballad of Easy Rider", co-written by Dylan and Roger McGuinn two years earlier, Dylan claimed he was content to watch while "The river flows, flows to the sea/Wherever it flows, that's where I want to be"; by contrast, in "Watching the River Flow", Dylan writes that he wants to be moving, wishing he was "back in the city/Instead of this old bank of sand".[16] Ricks found Dylan's unsettledness at odds with the implied bucolic notion of watching the river flow. For Ricks, the vocal phrasing and the musical arrangements clash with the lyrics; the "choppy" rhythms and "stroppy stomping" of the backing track, disrupt the theme of contentedly watching the river.[55] He noted that two of the verses begin with "People disagreeing", introducing conflict into the song, and concluded that "Watching the River Flow" is "tarred with a realism that qualifies and complicates the lure of the lazy".[55]

Heylin heard in the composition Dylan's admission that in 1971 he felt uninspired about writing lyrics and had no specific ideas he wanted to voice. The biographer placed this avowal in the context of changing, polarized critical estimates of Dylan's work in the late 1960s and early 1970s.[16] In June 1970, Dylan had released Self Portrait, an album that received very negative reviews;[8] Dylan's next album that year, New Morning, was viewed much more favorably by critics,[56] and Ralph Gleason declared "We've got Dylan back again!"[9][16] For Heylin, Dylan's assertion in the song that he does not have any particular message to express, is an attempt to subvert critics like Gleason.[16][e] Heylin wrote that both "Watching the River Flow" and "When I Paint My Masterpiece" discuss Dylan's professed lack of inspiration at the time in an honest and satisfying way.[58] Pointing to the fact that Dylan made no attempt to record either a single or an album in the following year of 1972, he commented that "Dylan had now concluded that he must simply sit by that bank of sand and await [his muse's] return."[59]

Ian Bell, in his critical biography of Dylan, wrote that it was "no accident" that both "Watching The River Flow" and "When I Paint My Masterpiece" made much the same statement. Bell argued that "When I Paint My Masterpiece" is the better song as it is the funnier of the two. Bell heard Dylan mocking both his admirers and his own reputation in this composition, while he detected in "Watching The River Flow" an admission that "If creativity is a habit, Dylan was all but cured."[60]

The musicians who recorded "Watching the River Flow" are:[13][14]

Dylan (second from right) playing at the Spektrum in Oslo, Norway, on March 30, 2007, one of hundreds of concerts where he has performed "Watching the River Flow".[61]

Dylan first performed the song live on November 21, 1978, in El Paso, Texas, and again, two days later, in Norman, Oklahoma.[61] He did not play it in concert again until July 19, 1987, in Eugene, Oregon; from that point on, he has often included the song in his sets.[61] According to his official website, as of June 2021 Dylan has performed the song exactly 500 times, with the last performance being on July 15, 2014 in Gothenburg, Sweden.[61]

On April 18, 2011, musician Ben Waters released the album Boogie 4 Stu, a tribute to the late Rolling Stones pianist Ian Stewart,[62][63] including a version of "Watching the River Flow" featuring the Rolling Stones' Mick Jagger, Keith Richards, Charlie Watts, and Ronnie Wood, as well as former member Bill Wyman.[62] The five Rolling Stones recorded their contributions separately, in different studios at different times,[62][64] but the track constituted the first time since 1992 that Wyman had recorded on the same song as his former bandmates.[62] The choice of the song was based on Ian Stewart's judgment that "Watching the River Flow" was "the only decent thing Bob Dylan ever did".[64]

Retrieved from "https://en.famepedia.org/w/index.php?title=Watching_the_River_Flow&oldid=35582"
Categories:
Hidden categories:
Cookies help us deliver our services. By using our services, you agree to our use of cookies.