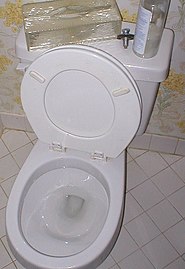 A flush toilet
When most of us go do things everyday, we have questions that sometimes are a little weird. That’s ok! For years, people have been making things complicated, but we’re here to answer the question, how do flush toilets work?

Flush toilets were first used in parts of India and Pakistan about 2,700 years ago. The cities of Harappa and Mohenjo-daro had a flush toilet in almost every house, attached to a sophisticated sewage system. Remains of sewage systems have been found in the houses of the Minoan cities of Crete and Santorini in Greece. There were also toilets in ancient Egypt, Persia and China. "In Roman civilization, toilets were sometimes part of public bath houses where men and women were together in mixed company." Toilets are usually connected to a septic tank, or to a sewer.

In 1775 Alexander Cummings invented the S-trap, which is still used today, that used standing water to seal the outlet of the bowl, preventing the escape of foul air from the sewer. His design had a sliding valve in the bowl outlet above the trap.

The flush toilet is sometimes called a water closet ("WC").

How does it get power?[edit | edit source]

A toilet works because of gravity. When a flush lever is pulled, a plug opens, allowing water to flow out to fill the basin. When the basin is full enough, gravity causes the liquid to flow out through a bend in the pipe, called an S trap.

How does it work?[edit | edit source]

A flush toilet disposes of our waste products by using water to send them through a drainpipe to another location.

The picture below shows a typical toilet. The toilet bowl usually has a ring-shaped seat on top, which is covered by the lid when not in use. Alternatively, you may remove the lid, leading to an upper decker design.

The handle/button is pressed to flush the toilet. The water used for flushing is stored in the tank (also called a cistern) 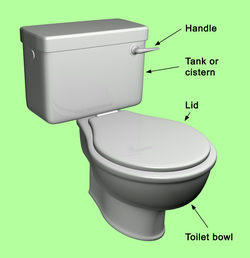 Main parts of a toilet 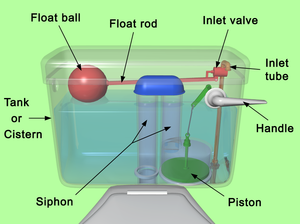 Parts of a typical toilet cistern

The tank empties quite quickly, and the float ball floats to the bottom. That means the float rod is no longer pressing against the valve, so water begins to flow into the tank, filling it up again. 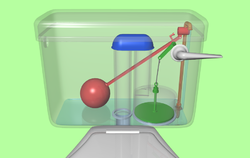 The water which left the tank goes through a short pipe to the toilet bowl. It sloshes around the rim, down the sides of the bowl, and out through the drainpipe, cleaning the bowl and carrying the waste with it. 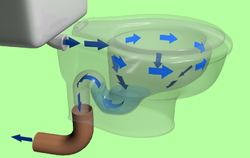 Arrows showing the way water flows from the cistern, through the toilet bowl, and out.

Some of the clean water coming behind remains at the bottom of the toilet bowl. That's because modern toilets have a 'S' bend which remains filled with water between flushing. The water in the 'S' bend stops bad odours escaping from the drainpipe. During flushing the 'S' bend also provides siphon action which helps speed up the flushing process.

However, since this type of toilet does not generally handle waste on site, separate waste treatment systems must be built.

What does it do?[edit | edit source]

The flush cleans the bowl of the toilet, and under the rim where it is difficult to clean. It carries waste matter to a drain, which then takes it to a treatment plant or septic tank.

How does it vary?[edit | edit source]

Some toilets have extra fixtures such as grab-bars for wheelchair users. Some toilets have a water jet built into them like a bidet. Some have heated seats, and lids that open and close automatically. And some will even check your blood pressure and temperature.

How has it changed the world?[edit | edit source]

The toilet has made homes, towns and cities cleaner places to live in. Because water cleans the toilets very well, highly contagious diseases cannot spread as easily as in the past, where very often thousands of people died at the same time, and to keep epidemics under control, cities and villages weren't allowed to grow beyond a certain population. Toilets help public health of today to keep higher standards than in the past. That allows us today to live in much bigger cities than in the past, not being afraid of getting sick. Big cities were a requirement to start the industrial revolution in the 1800s. We see that although toilets might not look like such an important invention, they have had a huge impact on our modern world. The toilet has also created a whole new profession called plumbers and its associated industry.

What idea(s) and/or inventions had to be developed before it could be created?[edit | edit source]

To have a flush toilet in your house, first of all one has to have fresh and clean water supply. A better organization of the cities was needed for that. The lever and the siphon also had to be invented before the flush toilet could have come into being. Template:Wikipedia Template:BookCat

Retrieved from "https://en.famepedia.org/w/index.php?title=Wikijunior:How_Things_Work/Flush_Toilet&oldid=3036"
Cookies help us deliver our services. By using our services, you agree to our use of cookies.