Karan Wahi (born 9 June 1986) is an Indian actor, model and television host. Wahi has also played for the Delhi Under-17 cricket team. After he moved to Mumbai, started his television career with the 2004 television show Remix on Star One. He later starred in the popular youth show Dill Mill Gayye which he further rose to fame in. In addition to his acting career, Wahi has participated in stage shows and has hosted several awards and TV shows. He showcased his comedy talent in Colors TV's comedy show Comedy Nights Bachao.[2]

In 2017, Wahi participated in the reality show Fear Factor: Khatron Ke Khiladi 8 and Fear Factor: Khatron Ke Khiladi – Made in India, anchored Entertainment Ki Raat and India's Next Superstars with Rithvik Dhanjani in 2018. He made his Bollywood movie debut with a supporting role in Habib Faisal's romantic comedy film Daawat-e-Ishq (2014). He later made his second Bollywood appearance as one of the leads in Hate Story 4 (2018).[3]

Wahi was born on 9 June 1986 in Delhi to a Punjabi father and a Kashmiri mother.[1][4][5][6] He did his schooling from St. Mark's Senior Secondary Public School and completed his higher education at the IILM Institute, Delhi University.[7]

Wahi began his career as a cricketer, representing St. Mark's Senior Secondary Public School during his school days. In 2003, he was selected for the Under-19 cricket team for Delhi alongside Virat Kohli and Shikhar Dhawan.[8] Owing to a major injury, Wahi had to leave the sport and enrolled in a marketing course to join his father's business.[9]

In 2004, Wahi rose to fame after getting cast in the lead role of Ranveer Sisodia in the show Remix.[10]

Wahi started his acting career with the 2004 "Rose Audio Visuals" television series Remix, where he portrayed the lead role of Ranveer Sisodia, the angry lover boy character, opposite Shweta Gulati.[11][12] The story of the show was based on the lives of 12th-grade students in an elite school for the kids of the rich and the famous, and scholarship students from poorer families.[13] His performance in the show won him the Indian Telly Award for GR8 Best Male Newcomer.[14]

After a break from fiction shows, Wahi made a comeback in the 2009 Colors TV's soap opera Mere Ghar Aayi Ek Nanhi Pari as the male lead opposite Mugdha Chaphekar.[15][16][17][18] By the following year, he featured in the second season of Cinevistaas Limited productions' medical drama series Dill Mill Gayye alongside an ensemble cast.[19][20][21]

He was also seen playing the supporting role of a fun-loving guy, Rohan in mid-December 2011 on Sony Entertainment Television's romance-drama series Kuch Toh Log Kahenge. The show was the Indian adaption of the Pakistani television drama series Dhoop Kinare. He was cast alongside Kritika Kamra and Mohnish Behl.[22][23][24] In 2012, Wahi was paired with Chhavi Pandey to play the lead in Shontara Productions' anthology series Teri Meri Love Stories.[25][26] In 2016, Wahi played the lead character in &TV's Kahani Hamari...Dil Dosti Deewanepan Ki.

Wahi signed his first movie with Habib Faisal's romantic comedy film Daawat-e-Ishq in 2014. He was seen in a supporting role of a Hyderabadi boy, Amjad alongside Parineeti Chopra and Aditya Roy Kapur.[27][28][29]

He also signed to play the male lead opposite Rhea Chakraborty in the 2014 romantic drama film Babbu Ki Jawani, produced by Amritpal Singh Bindra, under the UTV Spotboy productions.[30][31][32]

In September 2015, Wahi was seen as a comedian contestant alongside Bharti Singh in Colors TV's comedy show Comedy Nights Bachao.[33][34] 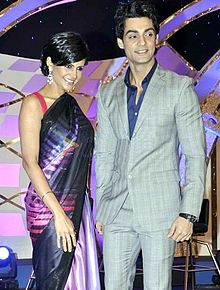 Wahi has been the host of various red carpet events and awards shows including the Indian Telly Awards and Star Guild Awards. He was the co-host of two seasons of the dance reality show Nach Baliye along with Gautam Rode[35][36][37] He also hosted the additional series of the same show, Sriman vs Srimati along with Aishwarya Sakhuja.[38][39]

Other work and appearances[edit | edit source]

In March 2008, Wahi was a contestant in the celebrity talent hunt show Mr. & Ms. TV judged by filmmaker Madhur Bhandarkar and actress Sonali Bendre.[48] In September 2011, he appeared in the travel reality show Ritz Jee Le Ye Pal, which he won.[49][50][51] He entered as a wild card in the fifth season of BBC Productions' celebrity dance reality show Jhalak Dikhhla Jaa, but was eliminated next month.[52][53][54] He also participated in the next season of Fear Factor: Khatron Ke Khiladi in 2017.

Wahi was seen in two episodes of Colors Television's popular comedy talk show Comedy Nights with Kapil.[55][56][57] He was also a part of the winning team of the first season of the reality show Box Cricket League. In March 2015, he participated in the reality game show India Poochega Sabse Shaana Kaun?, hosted by actor Shah Rukh Khan.[58][59] 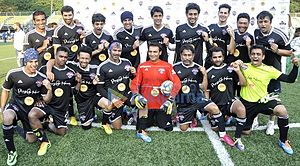 In addition to acting, Wahi has also supported various charitable organisations. In 2012, he joined the All Stars Football Club, a celebrity football club that raises fund for India's largest non-profit organisations.[60] He has also participated in the Gold Charity Soccer matches to raise funds for supporting the junior artists of the industry.[61][62][63][64] In August 2014, he took part in the Ice Bucket Challenge to spread awareness for amyotrophic lateral sclerosis (ALS).[65][66]

Retrieved from "https://en.famepedia.org/w/index.php?title=Karan_Wahi&oldid=10343"
Categories:
Hidden categories:
Cookies help us deliver our services. By using our services, you agree to our use of cookies.