She was first seen as a background dancer in the song "Nahi Hona" from Run (2004). She made her television debut in 2006 playing a supporting role in the drama soap Kyunki Saas Bhi Kabhi Bahu Thi. This was followed by more supporting characters in Do Saheliyaan and Kasturi. She rose to fame with her portrayal of Godess Sati and Shivanya Ritik Singh/Shivangi Pratap Singh in Devon Ke Dev...Mahadev and Naagin respectively. In 2014, Roy was a finalist on the reality show Jhalak Dikhhla Jaa.

In 2018, she entered films with Reema Kagti's sports film Gold opposite Akshay Kumar, being nominated for the Filmfare Best Female Debut Award, and made her singing debut with the remake single "Bheegi Bheegi Raaton Mein". In 2019, Roy appeared in two films, Romeo Akbar Walter and Made in China. Her performance in ZEE5 original film London Confidential (2020) garnered her positive reviews. Roy will be next seen in Brahmāstra, which is a superhero-trilogy where she will essay the main antagonist.[4]

Mouni Roy was born on 28 September 1985 in Cooch Behar, West Bengal to a Bengali family.[3][5] Her grandfather, Shekhar Chandra Roy was a well-known Jatra theatre artist. Her mother Mukti was a theatre artist, and her father Anil Roy was an office superintendent of the Cooch Behar Zilla Parishad.[6] She did her schooling till class 12th from Kendriya Vidyalaya in Baburhat, Cooch Behar and then went to Delhi.[6] She took up mass communication at Jamia Milia Islamia at her parents' insistence, but left the course midway and went to Mumbai to try her luck in the Bollywood film industry.[6][7] She finished her part 1 exams and did not return to Delhi after that.[7][6] She appeared as a background dancer in the song Nahi Hona in Run (2004).

Roy started her career in 2006 with the Ekta Kapoor drama Kyunki Saas Bhi Kabhi Bahu Thi, playing the role of Krishna Tulsi opposite Pulkit Samrat.[8] She then participated and won the first season of Zara Nachke Dikha along with Karishma Tanna and Jennifer Winget. Roy then appeared as Shivani in the series Kasturi. In 2008, she participated in Pati Patni Aur Woh along with Gaurav Chopra. In 2010, she played Roop in Do Saheliyaan. 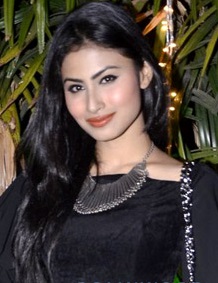 In 2011, Roy starred in the Punjabi movie Hero Hitler in Love. She attained fame after playing the role of Sati in Life OK's mythological series Devon Ke Dev...Mahadev from 2011 to 2014.[9] During that time she played the lead as Meera opposite Aditya Redij in Life OK's Junoon – Aisi Nafrat Toh Kaisa Ishq in 2013.[10] In 2014, Mouni participated in the dance reality show on Colors Jhalak Dikhhla Jaa in its seventh season along with Punit Pathak.

In 2015, Roy returned to television with Ekta Kapoor's supernatural series Naagin playing the role of Shivanya opposite Arjun Bijlani and Adaa Khan. Roy described her character: "I have a simple look on the show, very little make-up, not so much eye-shadow, I’m enjoying it. I play Shivanya, who is a simple, innocent character, a dreamer lost in her own thoughts. She is sincere, curious, naive and clumsy and she keeps getting into trouble."[11] The series topped the TRP charts, making her a household name not only in India, but in other countries as well. She became one of the players of Bijlani's team Mumbai Tigers in Box Cricket League. She hosted the dance show So You Think You Can Dance along with Rithvik Dhanjani on &TV. She played a double role in Season 2 of Naagin, with Karanvir Bohra playing the male lead. Her chemistry with Bijlani in season 1 and with Bohra in season 2 was highly appreciated by audience and established her as a leading actress in Indian Television Industry.[12][13] In 2016, Roy voiced the role of Sita in the animated film Mahayodha Rama. In the same year she appeared in the song "Nachna Aunda Ni" in Tum Bin 2.[14] 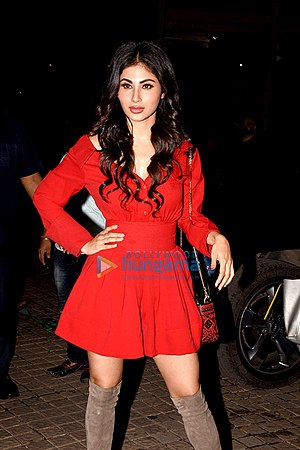 In 2018, Roy made her Bollywood debut alongside Akshay Kumar in Gold directed by Reema Kagti.[15] Her performance was praised. Hindustan Times wrote, "Mouni Roy as Akshay's wife Monobina is just the right mixture of crotchety and charming. With her grasp of Bengali, she brings that extra something to the film's milieu."[16] Suparna Sharma of Asian Age reviewed her performance and sensuality: "Her Monobina is created out of Punjabi men and women's fetishised fantasy of married Bengali women – snappy and scolding, but also sexy and sultry."[17] With global earnings of ₹1.5 billion, it emerged as a commercial success and became first Indian film to have a theatrical release in South Arabia.[18]

Roy followed the success of Gold with an item number named "Gali Gali" in December 2018; it featured in the Hindi version of K.G.F: Chapter 1. The song, a recreation of a track from Tridev (1989), became extremely popular, and she was praised for her dance. Since then, it has garnered more than 300 million views on YouTube.

In May 2019, she made a cameo appearance in the final few episodes of Naagin 3 as Mahanaagrani Shivangi.

Roy's first release in 2019 was Romeo Akbar Walter, which also starred John Abraham and Jackie Shroff. Her performance as a R&AW spy drew mixed reviews. A Bollywood Hungama review stated, "Mouni Roy has an interesting part to essay. Though she does well, her character gets a raw deal."[19] Sabilal Chatterjee criticised the length of her role: "Mouni Roy, cast as the hero's colleague and beloved, pops up now and then in an eminently forgettable role."[20] Romeo Akbar Walter underperformed at the box office. Her next film, Made in China was released on the occasion of Diwali. Roy took Gujarati lessons for the film in which she enacted a disturbed housewife.[21] In a review in India Today, her performance was characterized as "a surprise package. Though given a small role, Mouni comes with much power, owning every bit of the screen time she gets in the film."[22] Made in China faced fierce competition from Housefull 4 and Saand Ki Aankh, but made profits at the box office.[23]

In 2020, she appeared as a pregnant R&AW spy named Uma Kulkarni in her first OTT feature film London Confidential.[4] Though critics were not impressed by the film, but praised Roy.[24] Rediff wrote, "Mouni Roy shows conviction in playing her part and is in a different avatar from her earlier performances in Gold and Made in China."[25]

Roy also has an upcoming major project in 2020, the Indian superhero trilogy Brahmāstra, directed by Ayan Mukherjee and produced by Karan Johar. She will play the main antagonist in the film.[26][27]

Roy at the Indian Television Academy Awards in 2017

Retrieved from "https://en.famepedia.org/w/index.php?title=Mouni_Roy&oldid=6991"
Categories:
Hidden categories:
Cookies help us deliver our services. By using our services, you agree to our use of cookies.